“This sets the stage for how other educational institutions can implement infrastructures to achieve carbon-neutral goals in the future.” 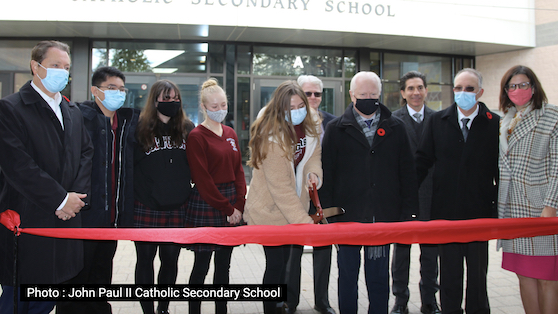 The news comes from Ameresco Inc., who announced the commercial operation of its carbon reduction, energy savings, and smart grid project with JP II.

Upgrades made to the educational facility include the installation of 2700 covered carport solar panels (providing 825 kW DC of power), piping for a geothermal heating and cooling system, a 2.2-MWh electrical energy storage system, and four electric vehicle charging stations.

The implemented improvements will greatly reduce GHG emissions, says Ameresco, as systems previously required to heat, cool and provide electricity to the school have been brought to near zero emissions, removing some 277 tons of carbon annually.

Ameresco helped secure an investment of $4.5 million from Natural Resources Canada’s Energy Innovation Program. The school also received funding from the Independent Electricity System Operator’s Grid Innovation Fund to demonstrate how the system could also provide both the local and bulk transmission grid with emission-free energy and ancillary support services to the grid.

“What’s really innovative about this project is that it will allow us, as grid operator, to test how John Paul II Catholic Secondary School can contribute to the reliability and affordability of the provincial grid,” said Katherine Sparkes, IESO’s Director of Innovation, R&D.

“Our work with JP II is a wonderful illustration of how a complex project—seemingly far beyond a facility’s budget—can be completed through flexible funding and adaptation,” said Bob McCullough, president, Ameresco Canada. “This sets the stage for how other educational institutions can implement infrastructures to achieve carbon-neutral goals in the future.”

To learn more about this project, as well as energy storage, microgrids, etc., have a listen to our conversation with Ameresco’s Jim Fonger earlier this year at EBPowerCon (below):