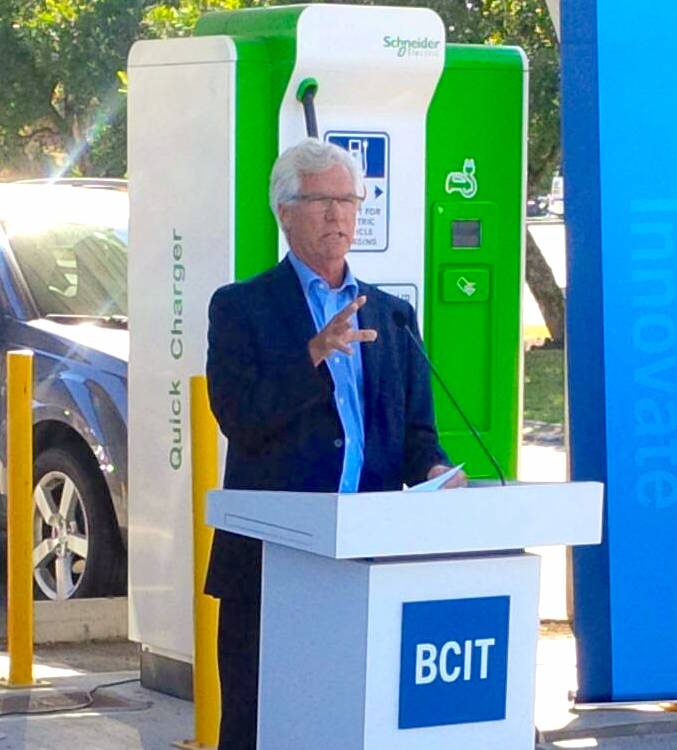 Minister Carr remarks on the importance of technology and innovation. Photo courtesy NRCan via twitter.com/NRCan.

OASIS stands for “Open Access to Sustainable Intermittent Sources”. The Energy OASIS project at the Burnaby Campus is part of BCIT’s Smart Microgrid system; it collects solar energy through solar PV (photovoltaic) panels, converts it into electrical energy, then stores it in lithium ion battery banks. An intelligent energy management system plans the distribution of stored energy to power various campus loads, including EV charging stations at the Burnaby Campus.

“Projects like this are a beacon of innovation in the Canadian clean energy industry, which our government will continue to support,” said James Gordon Carr, Canada’s minister of natural resources.

The OASIS system components include:

At full capacity, OASIS should be capable of generating over 142 MWh per year, says BCIT. Depending on how it is configured, some of that energy will go toward supporting EV charging, and some will go back into the BCIT grid to help offset campus energy costs.

BC Hydro president & CEO Jessica McDonald noted the Energy OASIS project will make an “important contribution to understanding the impact of new technologies on the grid”.

Some project history…
A joint working group between BCIT and BC Hydro took on the task of defining the OASIS initial blueprint. The project officially kicked-off in June 2012 with a multi-stakeholder partnership between BC Hydro, Panasonic Eco Solutions Canada (PESCA), Siemens Canada, Schneider Electric and car2go.

In the months following, component problems and deficiencies had to be addressed. As such, the operational percentages were low, with the system in operation less than 20% of the time. An extension to the system commissioning period was required to resolve the operational problems that had arisen, including the addition of an acoustic enclosure to mask equipment noise and modification of faulty control logic.

By the end of November 2015, however, OASIS was operating continuously (aside from regular maintenance and minor downtime), which boosted its availability to about 85%. In the next nine months, the PV system generated 135MWh of energy, a 72% increase over the same period in the previous year. The total solar generation of OASIS since it came online is 260MWh. The project was successful at demonstrating the use of a solar PV system to generate, store and support EV charging stations using a BESS (battery energy storage system).

Up to the end of August 2016 (last month), the two DC fast chargers were used over 1700 times, consuming nearly 15MWh of energy. The vehicle models included the Nissan Leaf, Kia Soul EV, Mitsubishi i-MiEV and Tesla Model S. An average charging session was about 20-min long and used 8.3kWh of energy.

In a 12-month period starting in September 2015, the system also supplied 3MWh of energy in over 700 charging sessions to EVs via a bank of six Level-2 charging stations. Although these chargers charged at a slower rate than the fast chargers, they serviced a wider range of EV models, as well as plug-in hybrids, extending the aforementioned list with the Chevrolet Volt, BMW i3, Smart Fortwo and Audi A3 e-tron.

— With files from NRCan. Photo of Minister Carr remarking on the importance of technology and innovation courtesy @NRCan.