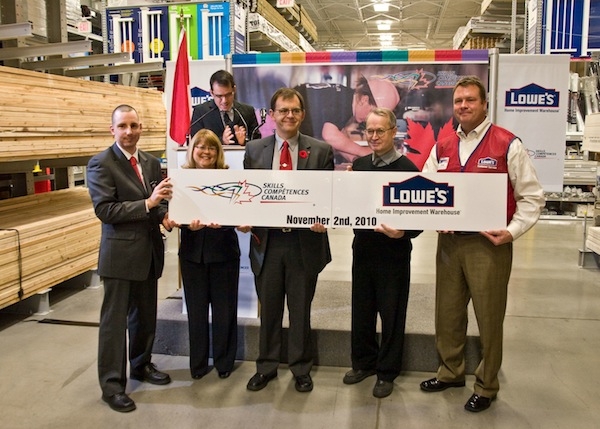 “Lowe’s is committed to helping close the gap on the impending shortage of skilled trade workers that Canada is facing,” said Huggins. “We are very passionate about the work Skills Canada is doing and are thrilled to partner with them. Through our investment, we will work with Skills Canada to help prepare the next generation work force with the world-class skills needed to become the contractors and industry leaders of tomorrow.”

The Lowe’s funding program is aimed at engaging students and teachers looking to improve their school campus, curriculum delivery or surrounding community. The contribution supports high school-based projects currently in place in the provinces of Alberta and Ontario, and will expand to other regions as Lowe’s establishes retail locations in other communities.

“It is because of partners like Lowe’s that we are able to continue our mission to encourage and support a coordinated Canadian approach to promoting skilled trades and technologies to youth,” said Donovan Elliott, S/CC president. “Skilled trades are the foundation of industries that drive the Canadian economy. With industry partners like Lowe’s, we can continue to help inspire and encourage youth to pursue career paths in skilled trades and technology while ensuring industry has the pipeline of skilled labour workers that they need for the future.”

An initiative of Skills/Compétences Canada, Skilled Trades & Technology Week is an annual event that generates awareness of the growing skilled labour challenges in Canada, and recognizes students developing trade and technology skills. The event includes interactive student skills demonstrations and activities across the country, hosted by S/CC provincial/territorial offices.