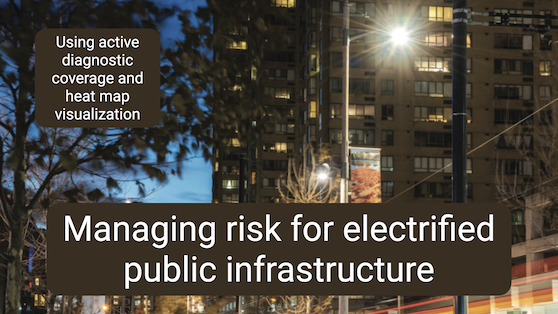 October 26, 2020 – Each year, hundreds of people around the world report incidents of being shocked due to faulty electrical wiring associated with aged and unmaintained streetlighting systems; they can involve severe physical injury to both humans and animals and, sometimes, even death.

Meanwhile, many forward-looking cities aim to transform themselves into smart cities, and preparations are required for advanced communications and controls. One of the most important upgrades is to make all lighting poles energized 24 hours a day, seven days a week, to allow the installation and operation of cellular antennas and various internet of things (IoT) devices.

The transition to continuous streetlight system energization could increase the risk of lighting pole shocks to the public. This phenomenon has prompted some cities to consider budgeting for the detection, measurement, and mitigation of the hazard.

Detection and mitigation of the risk are not as straightforward as they may seem, as there are typically tens of thousands of lighting poles in a city. Replacing each pole’s entire wiring system, or checking them individually for shock risk, is expensive and time-consuming, and only effective at the time of testing (which then requires constant manual testing, which will soak up the budget).

Is there another way? Considering the limitations of upgrading so many lighting systems, the order of execution is as important as employing a detection method that is always capable of being in operation.

Instead of repairing every light fixture in the city, a risk-based approach can be taken to address which ones should be maintained first, then in which order. Existing city databases of infrastructure contents, age, relative population density, and usage can be valuable data that allows for the assessment of risk factors for every location.

This still does not solve the underlying issue, but it allows for a strategic approach for the order of repair. Heat maps of the community can show relative risk severity over a geographical area for effective communication.

Take Figure 1, for example, where the heat map shows the current scenario of lighting poles that are only energized at night. Now, compare that with Figure 2, which shows poles that are energized 24/7, and the relative risk (using weighted parameters). Only a fraction of the poles offers a significant risk, while others remain low risk. In some cases, this simple exercise can reduce the number of lights requiring immediate service by 80%. 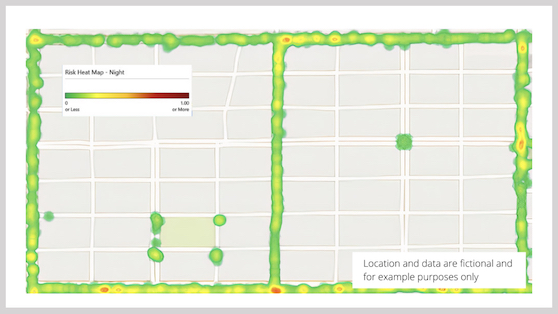 But this is a challenging, time- and resource-consuming task given the scale of streetlighting infrastructure within a large city.

An intermediate solution would be to reduce exposure to the hazard through real-time monitoring and fast response time (less than a few seconds). In other words, fixing the hazard to avoid the public’s exposure to it, rather than leaving an active pole in service for weeks (maybe years) until it harms someone.

This is known as having high diagnostic coverage, which can be improved by installing a fault monitoring system at each distribution panel (which distributes up to 10 light fixtures). When a fault is discovered, the offending circuit is removed from service by means of an automated disconnect, and the maintenance crew can be notified by means of an automated email or SMS with a description of the location and severity of the event.

With high diagnostic coverage, the poles can be repaired in the order in which the hazards are detected. Meanwhile, the order in which the monitoring equipment can be installed is determined by the relative risk assessed from the existing database. Combining risk detection with isolation measures can lead to both cost-effective assessment of risk while avoiding excessive maintenance on non-hazardous systems.

Figure 3 shows the heat map presented in Figure 2 after applying risk reduction through operational procedures and response time method. In this example, the response time of three hours is considered for the monitoring system for notifying the maintenance crew, the crew arriving at the panel location, and manually testing the poles of the circuits. Once the abnormal pole is identified, the crew isolates the hazard and reduces the public risk. By implementing this risk mitigation strategy, the risk of contact voltage hazards associated with streetlight infrastructure can be reduced up to 99.97%. 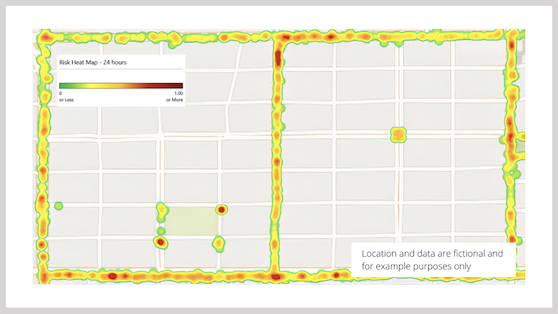 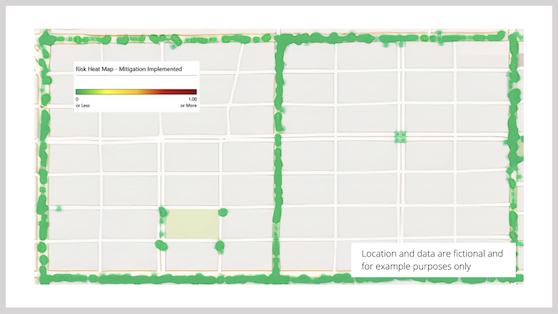 A heat map is a potent tool for presenting contact voltage hazards, their severity and location. By combining this tool with advanced diagnostic coverage, municipalities can prioritize their resources and efforts toward strategically mitigating the risk of contact voltage in public infrastructure. This solution also enables the streetlighting poles to remain energized 24/7 to facilitate smart city requirements. Risk reduction through advanced diagnostic coverage and order of upgrades can significantly reduce the risk of public exposure while eliminating the need to completely upgrade the system.

This article—along with other great content—appears in the October 2020 edition of Electrical Business Magazine.