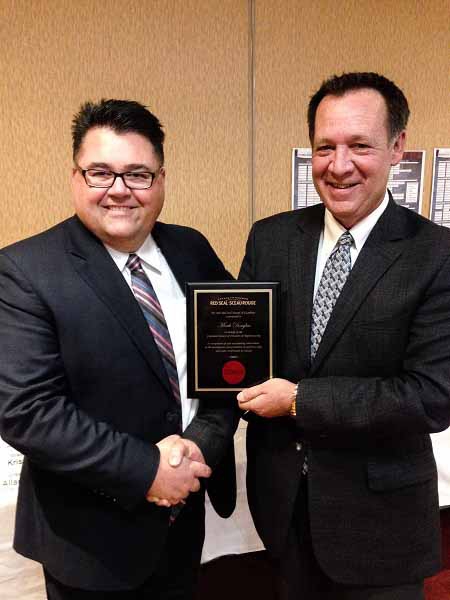 November 25, 2015 – During the Fall Meeting of the Canadian Council of Directors of Apprenticeship (CCDA), the 2015 Red Seal Award of Excellence was presented to Mark Douglas, former executive director of Apprenticeship & Industry Training, Alberta. Congratulations!

CCDA established this award to recognize the contribution and leadership of staff working in the field of apprenticeship and trade certification. It is awarded every two years (odd-numbered years) to an individual “providing outstanding achievement in the development and promotion of apprenticeship training in Canada”.

According to CCDA’s chair, Jeff Ritter, Douglas’ career included work as a Red Seal journeyperson electrician, post-secondary instructor, and 25 years with Alberta Apprenticeship and Industry Training. Mr. CCDA says he was instrumental in the creation of Alberta’s Blue Seal Program, which supports tradespeople in developing business skills to help them transition into leadership, supervisory and entrepreneurial roles. Also, “Mr. Douglas has been a strong advocate of the Northern Alberta Institute of Technology’s [NAIT’s] Trades-to-Degrees program, allowing trades professionals to utilize their trades credential to move into the third year of the Bachelor of Business Administration degree program”.