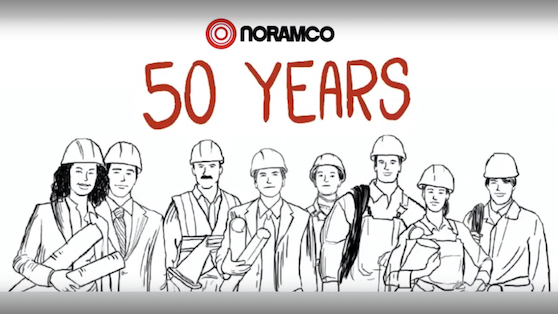 April 15, 2021 – One of the largest master distributors of wire, cable, fiber, and cable accessories in Canada—Noramco—is celebrating its 50th anniversary this year. Congratulations!

In 1971, the company was started by George McNeil and Wayne Swift with just a small warehouse in Burnaby, B.C., to service the forestry industry in that province.

At that time, the company had no cable-cutting equipment. The floor of the warehouse was marked out in feet; cable was rolled out to the length required, then cut with a hacksaw.

Through the 1970s, Noramco opened locations in Edmonton and Calgary to better serve the need for industrial cables in the oil & gas sector.

In 1987, the company opened a location in Toronto, focusing on the burgeoning downtown core. More branches would be added in London and Hamilton to better service the Greater Toronto Area.

In 1988, Noramco was acquired and became part of Guillevin’s group of companies. In 1989, Gary McNeil took over for the retiring George McNeil.

In 1995, Noramco acquired Metro Wire (then rebranded as Noramco) to serve Quebec and Eastern Canada. In the 2000s, locations were opened in Winnipeg and Saskatoon to further serve central Canada, particularly in agriculture and manufacturing.

All year long, customers will have opportunities to join in the celebrations and win prizes. Check with your Noramco account manager every month as to what events are scheduled, and how you can enter to win.

As for the next 50 years, Noramco tells us “We envision sustained growth as one of the largest distributors of electrical and electronic wire & cable and data communications products in Canada, while continuing to develop the full product solutions and services that support numerous industries and sectors across the country.”