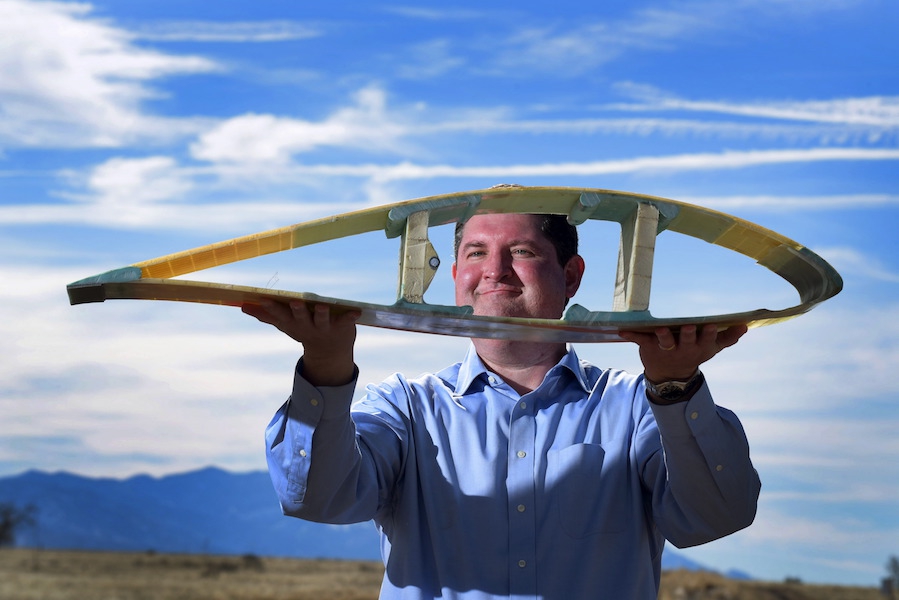 Todd Griffith shows a cross-section of a 50m blade, which is part of the pathway to the 200m exascale turbines being planned under a DOE ARPA-E-funded program. The huge turbines could be the basis for 50MW offshore wind energy installations in the years ahead. Photo by Randy Montoya.

January 29, 2016 – Can you imagine a wind turbine blade longer than two football fields? Neither can we, but researchers at Sandia National Laboratories can not only can imagine it, they’re designing it.

Sandia is researching what it calls the extreme-scale Segmented Ultralight Morphing Rotor (SUMR)—a low-cost, offshore 50MW turbine requiring a rotor blade more than 650-ft long, which would be 2.5x longer than any existing wind turbine blade. The work is funded by the U.S. Department of Energy’s (DoE) Advanced Research Projects Agency-Energy program.

The research team is led by the University of Virginia and includes Sandia and researchers from the universities of Illinois and Colorado, the Colorado School of Mines and the National Renewable Energy Laboratory (NREL). Corporate advisory partners include Dominion Resources, General Electric Co., Siemens AG and Vestas Wind Systems.

Sandia’s previous work on 13MW systems uses 328-ft blades on which the initial SUMR designs are based. While a 50MW horizontal wind turbine is beyond the size of any current design, Sandia says, studies show that load alignment can dramatically reduce peak stresses and fatigue on the blades. This reduces costs and allows construction of blades big enough for a 50MW system.

Most current U.S. wind turbines produce power in the 1MW to 2MW range, with blades about 165-ft long, while the largest commercially available turbine is rated at 8MW with 262-ft long blades.

Todd Griffith shows a cross-section of a 50m blade, which is part of the pathway to the 200m exascale turbines being planned under a DOE ARPA-E-funded program. The huge turbines could be the basis for 50MW offshore wind energy installations in the years ahead. Photo by Randy Montoya.

PHOTO 1: Todd Griffith shows a cross-section of a 50m blade, which is part of the pathway to the 200m exascale turbines being planned under a DOE ARPA-E-funded program. The huge turbines could be the basis for 50MW offshore wind energy installations in the years ahead. Photo by Randy Montoya.

PHOTO 2: Sandia’s 100m blade is the basis for the Segmented Ultralight Morphing Rotor (SUMR), a low-cost offshore 50-MW wind turbine. At dangerous wind speeds, the blades are stowed and aligned with the wind direction, reducing the risk of damage. At lower wind speeds, the blades spread out more to maximize energy production. Illustration courtesy TrevorJohnston.com/Popular Science.

“The U.S. has great offshore wind energy potential, but offshore installations are expensive, so larger turbines are needed to capture that energy at an affordable cost,” Griffith said.

But barriers remain before designers can scale up to a 50MW turbine.

“Conventional upwind blades are expensive to manufacture, deploy and maintain beyond 10-15MW. They must be stiff to avoid fatigue and eliminate the risk of tower strikes in strong gusts. Those stiff blades are heavy, and their mass, which is directly related to cost, becomes even more problematic at the extreme scale due to gravity loads and other changes,” Griffith explained.

He said the new blades could be more easily and cost-effectively manufactured in segments, avoiding the scale of equipment needed for transport and assembly of blades built as single units.

The exascale turbines would be sited downwind, unlike conventional turbines that are configured with the rotor blades upwind of the tower.

SUMR’s load alignment is bio-inspired by the way palm trees move in storms. The lightweight, segmented trunk approximates a series of cylindrical shells that bend in the wind while retaining segment stiffness. This alignment radically reduces the mass required for blade stiffening by reducing the forces on the blades using the palm-tree inspired load-alignment approach.

Segmented turbine blades have a significant advantage in parts of the world at risk for severe storms, such as hurricanes, where offshore turbines must withstand wind speeds over 200 mph. The blades align themselves to reduce cantilever forces on the blade through a trunnion hinge near the hub that responds to changes in wind speed.