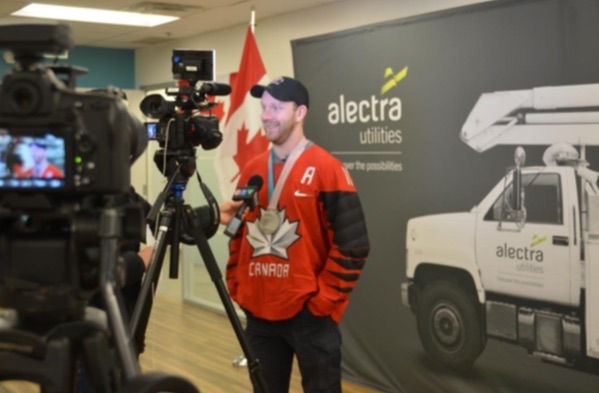 Adam Dixon, Meter Technician, was all smiles while talking about his Paralympic journey in PyeongChang while sporting his silver medal. Photo courtesy Alectra.

February 15, 2018* – Adam Dixon, a meter technician at Alectra Utilities has returned from Pyeongchang, South Korea, with a silver medial from the Canadian sledge hockey team’s participation at the 2018 Paralympic Winter Games. Dixon also earned the top defenceman award for achieving the most points as a defenceman. Congratulations!

“The most challenging aspect of all of this is balancing work, life and hockey, but Alectra has offered me flexibility in my busy schedule and played a huge role in my success,” said Dixon. “With their support I am able to chase two dreams at once: sledge hockey and my career as a meter technician.”

In November 2017, Dixon completed his four-year apprentice program and is now recognized as an Alectra Utilities journeyperson meter technician.

When Dixon was 10, he was diagnosed with Edwing’s Sarcoma. The rare type of bone cancer resulted in him undergoing a year of chemotherapy and the removal of his right tibia. As a former stand-up hockey player, his parents introduced him to sledge hockey as a way for him to continue participating in the sport.

In addition to being named to Canada’s para ice hockey roster for the games, the utility reports Dixon was also selected to be an alternate captain—a role he has played on previous teams. The 28 year-old has already competed in two Olympics: Vancouver (2010) and Sochi (2014), and he brought home gold in last year’s World Championships held in Gangneung, South Korea. Dixon also played in the 2017 World Sledge Hockey Challenge in Charlottetown, PEI.