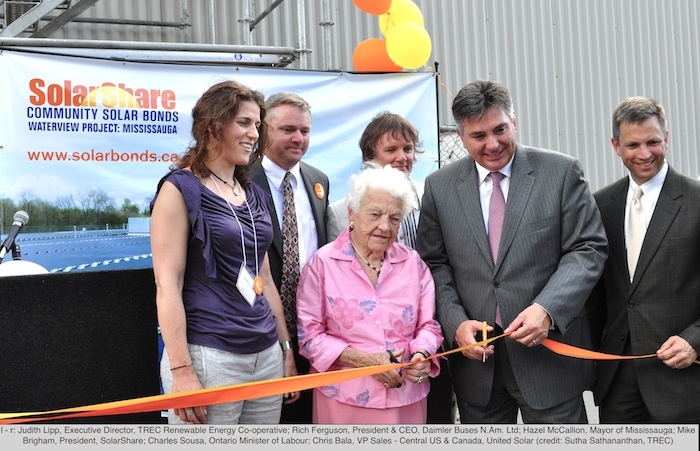 “This landmark event is a precedent‐setting example of community and commercial collaboration in clean energy development,” said Mike Brigham, president of SolarShare and chair of the TREC Renewable Energy Co‐operative, the organization that incubated the SolarShare co‐op. “The WaterView project has brought together cutting‐edge technology, industry‐leading design and local human resources in a project that allows residents in Mississauga and across the province to invest in, and benefit from, clean solar power.”

According to SolarShare, WaterView is the largest of 18 solar power installations in Ontario that form the SolarShare Co-operative portfolio, totaling more than 600kW of capacity and representing over $3 million of investment.

SolarShare goes to market later this month with community solar bonds, allowing all Ontario residents and businesses to become members and invest in solar through the co‐op.

“We have deployed our innovative PowerTilt system, which enables a high yield output from the solar array while limiting weight and impact to the roof structure. We expect this to be the first of many Uni‐Solar systems on large commercial and institutional rooftops throughout Ontario,” said Christopher Bala of United Solar.

“AGT and our Canadian subsidiary AGT Solar have installed many rooftop solar projects around the world, but this project stands out and is special,” added Graham Smith, executive vice president of AGT Solar. “We are proud to have played a small part, and congratulate Solarshare, UniSolar and Daimler for their visionary commercial and community partnership.”