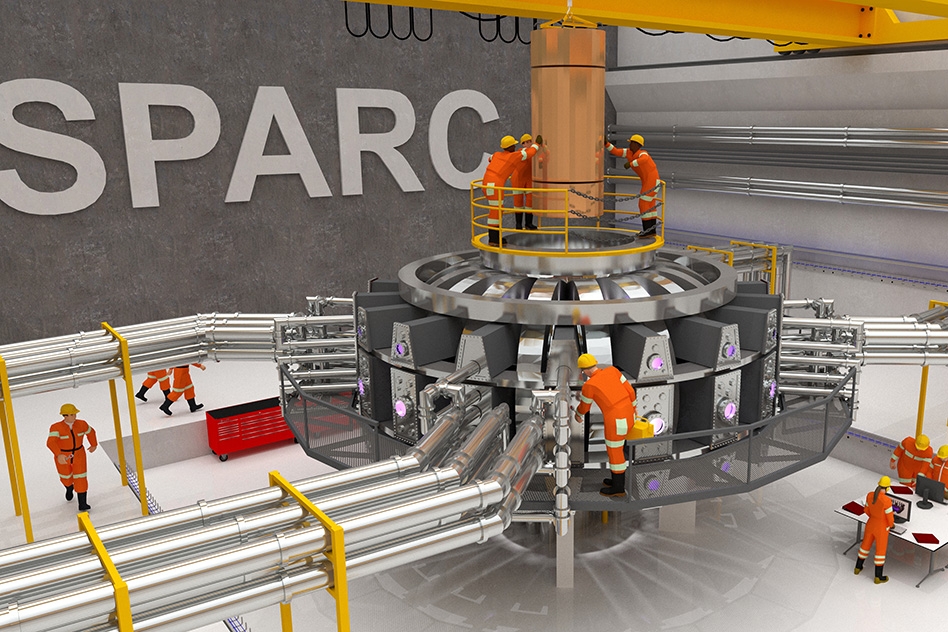 March 12, 2018 – Progress toward the long-sought dream of fusion power—potentially an inexhaustible and zero-carbon source of energy—may be about to take a dramatic leap forward thanks to a collaboration between MIT and Commonwealth Fusion Systems.

CFS will join MIT in carrying out “rapid, staged research leading to a new generation of fusion experiments and power plants based on advances in high-temperature superconductors”, with the goal of producing a working pilot plant within 15 years.

CFS says it has attracted an investment of $50 million in support of this effort from Eni, an Italian energy company, and continues to seek additional investors. CFS will fund fusion research at MIT as part of this collaboration, with an ultimate goal of rapidly commercializing fusion energy and establishing a new industry.

“Fusion is the true energy source of the future, as it is completely sustainable, does not release emissions or long-term waste, and is potentially inexhaustible,” said Eni CEO Claudio Descalzi. “It is a goal that we are increasingly determined to reach quickly.”

The new effort aims to build a compact device capable of generating 100 MW of fusion power. If all goes according to plan, the device will demonstrate key technical milestones needed to ultimately achieve a full-scale prototype of a fusion power plant.

CFS will support more than $30 million of MIT research over the next three years through investments by Eni and others. This work will aim to develop the world’s most powerful large-bore superconducting electromagnets—the key component that will enable construction of a much more compact version of a fusion device called a tokamak. The magnets, based on a superconducting material that has only recently become available commercially, will produce a magnetic field four times as strong as that employed in any existing fusion experiment, enabling a more than 10-fold increase in the power produced by a tokamak of a given size.

The project was conceived by researchers at MIT’s Plasma Science & Fusion Center, led by Dennis Whyte, Martin Greenwald and a team that grew to include representatives from across MIT.

Once the superconducting electromagnets are developed by researchers at MIT and CFS—expected to occur within three years—MIT and CFS will design and build a compact and powerful fusion experiment called SPARC. The experiment will be used for what is expected to be a final round of research, enabling design of the world’s first commercial power-producing fusion plants.

SPARC is designed to produce about 100 MW of heat. While it will not turn that heat into electricity, it will produce, in pulses of about 10 seconds, as much power as is used by a small city. That output would be more than twice the power used to heat the plasma, achieving the ultimate technical milestone: positive net energy from fusion.

This demonstration would establish that a new power plant of about twice SPARC’s diameter, capable of producing commercially viable net power output, could go ahead toward final design and construction. Such a plant would become the world’s first true fusion power plant, with a capacity of 200 MW of electricity, comparable to that of most modern commercial electric power plants. At that point, its implementation could proceed rapidly and with little risk, and such power plants could be demonstrated within 15 years.

The project is expected to complement the research planned for a large international collaboration called ITER, currently under construction as the world’s largest fusion experiment at a site in southern France. If successful, ITER is expected to begin producing fusion energy around 2035.

By using magnets made from the newly available superconducting material—a steel tape coated with a compound called yttrium-barium-copper oxide (YBCO)—SPARC is designed to produce a fusion power output about a fifth that of ITER, but in a device that is only about 1/65 the volume, said MIT’s Zach Hartwig. The ultimate benefit of the YBCO tape, he added, is that it drastically reduces the cost, timeline and organizational complexity required to build net fusion energy devices, enabling new players and new approaches to fusion energy at university and private company scale.

The way these high-field magnets slash the size of plants needed to achieve a given level of power has repercussions that reverberate through every aspect of the design. Components that would otherwise be so large that they would have to be manufactured onsite could instead be factory-built and trucked in; ancillary systems for cooling and other functions would all be scaled back proportionately, and the total cost and time for design and construction would be drastically reduced.

“What you’re looking for is power production technologies that are going to play nicely within the mix that’s going to be integrated on the grid in 10 to 20 years,” Hartwig said. “The grid right now is moving away from these 2- or 3-GW monolithic coal or fission power plants. The range of a large fraction of power production facilities in the U.S. is now in the 100 to 500 MW range. Your technology has to be amenable with what sells to compete robustly in a brutal marketplace.”