“The nuclear industry is focusing too much on science and logic when talking about this emotional subject.” 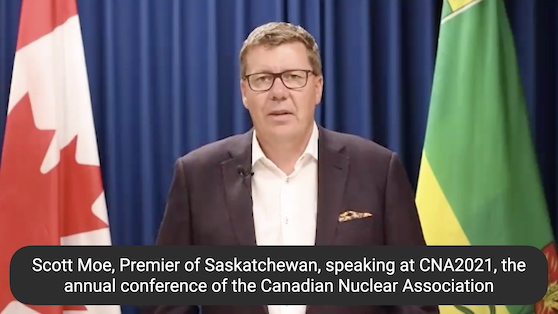 Gorman is the president & CEO of the Canadian Nuclear Association, and his comments came during the panel session “Advancing the Canadian Electricity Conversation”, conducted during CNA’s annual conference, CNA2021. Besides Gorman, the panel included spokespersons representing solar and wind, water, and marine energies, as well as human resources in the electrical sector. 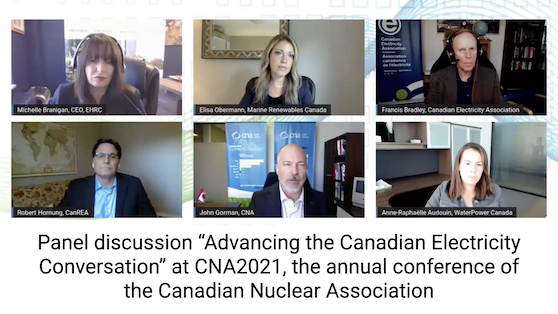 To do this, we will require a lot more electricity.

And we needed to have started this massive build-out years ago, lamented Robert Hornung of the Canadian Renewable Energy Association, noting that while there are many “one-off” measures across the country, Canada does not have a nationwide, comprehensive energy strategy. No overarching vision.

And heavy industry, Gorman added, doesn’t have any guidance for a “fuel switch,” echoing Hornung’s statement that we “need a pan-Canadian framework”.

Solid policy gives investors, developers and related stakeholders the confidence to move forward with projects. Lacking good policy—or policy that flip-flops across jurisdictions—does nothing to help move things along.

“Industry has the solutions,” Hornung pointed out, but government policy, regulators, “need to catch up.”

Keynote speaker Scott Moe, Premier of Saskatchewan, is fully supportive of nuclear energy “for power, for medical, for jobs, for climate change”.

During his address at CNA2021, he expressed his disappointment with Ottawa, which has yet to step in to support small modular reactor (SMR) innovation and technology in Canada. Currently, Canada’s SMR Action Plan is only an initiative among several provinces, Saskatchewan being one of them.

I told my daughter I was attending CNA2021. She asked:

“Are those the people that make bombs?”

“No, these are the folks involved in nuclear power generation, nuclear for medicine and medical purposes… not bombs,” I explained.

This confusion (misinformation?) speaks to the timeliness of one of the panels I attended at CNA2021, “Non-traditional nuclear advocacy”, which introduced us to a few independent, pro-nuclear advocacy groups who are fighting for nuclear energy in the context of climate change and energy poverty.

One of the panelists, Kristin Zaitz, is a civil engineer by training. She wasn’t raised a supporter of nuclear.

While in school, her class was tasked with delivering a speech on a controversial subject. Diablo Canyon nuclear generating station was not far, so she decided her speech would be about nuclear energy. She carried out all her own research, and realized “everything people said about nuclear was wrong”.

Zaitz was very proud of her speech which, she says, addressed the subject matter objectively, impartially, yet her professor gave her a poor mark because he was anti-nuclear.

At that moment, she realized attitudes toward nuclear energy are not necessarily grounded in fact. “Nuclear is an emotional topic,” she said.

Zaitz went on to become co-founder, president & CEO of Mothers for Nuclear.

Panelist Chris Keefer MD, CCFP-EM, admitted he used to get very anxious while driving through Pickering, Ont., and its nuclear generating station. However, once this emergency room doctor understood the science and its clean air advantage, he became a nuclear energy proponent.

“[Nuclear energy] provides the abundant, reliable energy we need to power modern society with only a fraction of the mining, fuel, and land requirements of other energy technologies. And it makes zero emissions,” reads the Canadians for Nuclear Energy site.

The panel noted that today’s youth did not grow up during the Cold War, Cuban Missile Crisis, etc. As such, they could be more receptive to nuclear energy, if they just knew more about it.

“Knowledge is power,” reads Zaitz’s bio on the Mothers for Nuclear website. “When I was pregnant, I inspected the inside of a containment dome during a refuelling outage. I knew from my dosimeter that I got less radiation exposure than my co-worker who ate a banana that day.”

But why all this fuss over wanting Joe Public to become pro-nuclear, anyway?

Because the panelists are all passionate environmentalists.

“As mothers, we feel a responsibility to protect our children, and the planet they’ll inherit,” reads the Mothers for Nuclear website.

“We believe that the evidence points to nuclear energy as the most-effective tool to transition off fossil fuels and eliminate air pollution,” reads a statement from Doctors for Nuclear Energy’s website.

As such, the panelists vehemently agree that nuclear energy is a powerful tool in the climate change toolbox, as it provides the massive amounts of energy we need for our power-hungry world in a relatively small footprint, with zero emissions.

The panelists cautioned that simply talking about how a nuclear generating station works is not going to convince anyone to become supportive. In that regard, they feel the nuclear industry is focusing too much on science and logic when talking about this emotional subject.

Instead, stories that are supportive of nuclear energy should come from the people who work in the industry; who know the science, but can connect with others on an emotional level.

When it comes to electricity, a lot of Canadian jurisdictions already produce the “clean” variety.

After some research (see Additional Reading, at bottom), I learned hydroelectricity makes up nearly 60% of Canada’s electricity generation. When it comes to provincial electricity supply from hydro, Manitoba (96.8%), Newfoundland & Labrador (95.6%) and Quebec (93.9%) barely use anything else.

Windpower accounts for 98.3% of provincial electricity supply in Prince Edward Island. In a very distant second is Nova Scotia, at 11.6%.

(While found all over the country, solar power’s contribution is largely negligible at 0.6% nationally.)

But consider… 49.9% of Nova Scotia’s electricity supply is derived from coal, while Saskatchewan and Alberta claim 42.9% and 39.8%, respectively.

Meantime, 100% of Nunavut’s electricity supply is derived from petroleum. In the Northwest Territories, 57.1%.

Maybe we need some of those small modular reactors we keep hearing about?

After all, according to the Canada Energy Regulator, Canada is a world leader in uranium production. Saskatchewan is currently the only uranium-producing province in Canada, and Cameco’s McArthur River/Key Lake mine in northern Saskatchewan is the largest uranium mine in the world (although operations have been suspended for an indeterminate period due to weak global demand).

If we put everything on the table—nuclear, wind, solar, marine, waterpower, biomass, etc.—and actually develop a pan-Canadian energy strategy, I have no doubt we will achieve cleaner air and avoid energy poverty here at home.

This feature—plus more great content—also appears in the December 2021 edition of Electrical Business Magazine. Even more back issues are located in our Digital Archive.