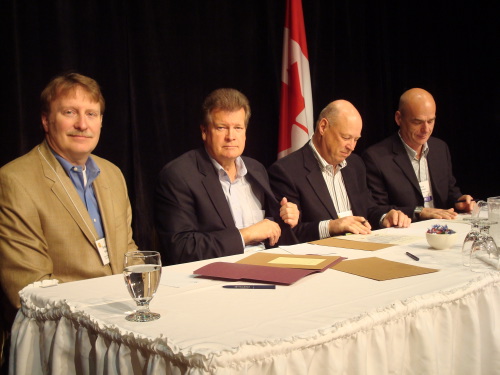 Tom Naber, president and CEO of the National Association of Electrical Distributors (NAED), will receive the Independent Electrical Contractors (IEC) President’s Award for Advancement of the Electrical Industry during the 52nd Annual IEC National Convention and Electric Expo in St. Louis, Mo.

“Tom is an industry veteran who strives to bring a spirit of
collaboration to today’s electrical industry,” said IEC national
president Steve Wiege. “His ability to bring together every segment of
the industry is well-known and respected by contractors, manufacturers
and distributors alike.”

Naber joined NAED in 1997 as publisher of TED magazine. In 2001, he was
named president of NAED, then promoted to president and CEO last year.
IEC, meantime, was founded in 1957, and is an American trade
association for merit shop electrical and systems contractors.

“IEC is a critical partner to NAED and an important leader in the
electrical industry. I’m honoured to receive this award on behalf of
NAED’s volunteer leadership, members and staff,” said Naber. “The
relationship between the contractor and the distributor is one of the
most important in the electrical channel. Together we are facing tough
economic times, as well as new potential opportunities coming from the
emerging solar, wind and other green technologies. It is imperative
that we continue to work together to ensure the future of both
contractors, distributors and our other industry partners—the
manufacturers and [their] representatives.”

IN THE PHOTO: Tom Naber sits at left during the signing of a Memorandum of Understanding between NAED and EFC’s Supply & Distribution Council earlier this year in St. John’s.