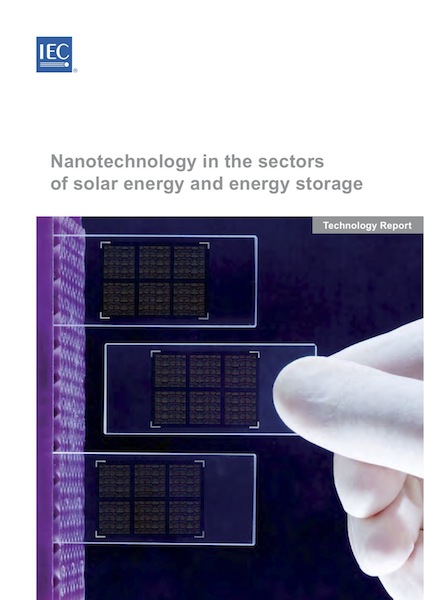 March 4, 2014 – According to ANSI, a new study from the International Electrotechnical Commission (IEC) and the Fraunhofer Institute for Systems and Innovation Research ISI finds that nanotechnology will bring significant benefits to the energy sector, especially to energy storage and solar energy.

Improved materials efficiency and reduced manufacturing costs are just two of the real economic benefits that nanotechnology already brings these fields, and that’s only the beginning, reports ANSI. Battery storage capacity could be extended, solar cells could be produced cheaper, and the lifetime of solar cells or batteries for electric cars could be increased—all thanks to continued development of nanotechnology.

Commissioned by IEC, the Fraunhofer study “Nanotechnology in the sectors of solar energy and energy storage” (download below) finds a range of nanomaterials that will grow in importance as technology continues to advance.

The following nanomaterial technologies will be of particular importance:

These seven technology profiles form the basis for two comprehensive roadmaps in the technology report. For example, through the use of nanotechnology, the light and energy generation of crystalline silicon solar cells or organic solar cells can already be enabled or significantly increased. Their manufacturing also requires less material and is more cost-efficient.

Energy storage capacity will significantly improve with the use of nanomaterials for lithium-ion batteries. This is by far the most important battery technology for energy storage since the early 1990s, says ANSI. It is especially important in view of the constantly increasing demand for electric vehicles, whose success is also directly linked to battery performance and resulting range extension.

Dr. Bjorn P. Moller, project leader of this study at Fraunhofer, is convinced that everything points to its large-scale application in solar power generation and energy storage, reports ANSI, unlike many other fields where nanotechnology has been unable to make a breakthrough.

“It can be assumed that, in 2035, the share of fossil fuels in global energy production will have decreased to 75%. This implies that renewable energy will need to contribute significantly more to the overall energy generation,” explained Moller. “It is, therefore, crucially important that key technologies such as solar cells are further developed with the help of nanotechnology, and that energy storage is improved.”

“Commissioning this study to evaluate the potential of nanotechnologies and the future role of nanomaterials in addressing the energy challenge helps the IEC to understand the kind of work that it needs to undertake to enable the broad roll out of these technologies,” said IEC general secretary and CEO Frans Vreeswijk.

“Against the backdrop of an anticipated 30% increase of global energy demand by 2035 and the significant expansion of renewable energy coming into the grid, the study has found that nanotechnologies, including new nanomaterials, could be a key to successful renewable energy and energy storage integration.”

The technology report will be of great use for those planning the use of solar energy and storage, concludes ANSI, whether they make products, use those products to generate and store electricity, or organize and regulate the use of the electric energy produced.

— ANSI says the information in its news report was originally published by the International Electrotechnical Commission (IEC).