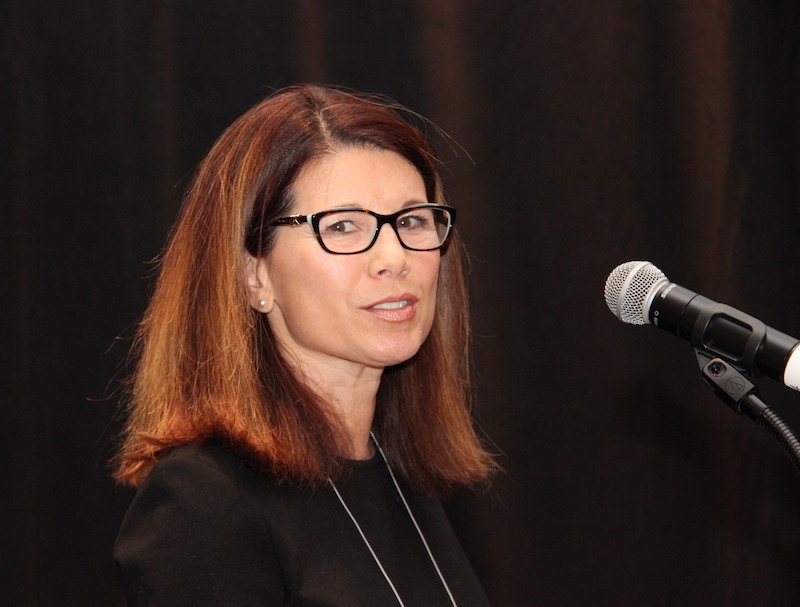 June 21, 2017 – By now you know Carol McGlogan is Electro-Federation Canada’s new president & CEO, replacing Jim Taggart, who led the association for six years. And while we’ve all seen the announcement, I wanted to chat with Carol to learn more about both her and the organization she now leads.

Navigating a sea of sameness
The former director of marketing at Philips Lighting credits Bill Saylor of Westburne and Dick Waterman of Nedco (later Rexel) for encouraging her to join EFC some 30 years ago, while she was with Canlyte. In fact, Carol is pretty sure Bill “phoned my boss, Abbey Drazen, to ask permission to ask me [to join]. I don’t know if any people still do that”. She got that permission, wholeheartedly, and joined EFC’s Supply & Distribution Council. Later, she served as both chair of the EFC board (2006) and the S&D Council (2002).

While the numbers are changing, the industry is still male-dominated, so I asked Carol what it was like to navigate that landscape when there were even fewer females.

“I always viewed [being a woman] as an advantage. When you’re in a sea of sameness—a sea of men—it’s actually more difficult for the men to differentiate themselves,” Carol noted, adding that, as a female, “you’re already differentiated”.

“And there’s a type of curiosity that, sometimes, opens a door, and then after that it’s about performance,” Carol underscored. “I’ve always found that, if you do good work, if you’re diligent, it doesn’t matter who you are… that’s what’s going to shine.”

Wearing the face of the organization
During her first official speech at the recent annual general meeting, Carol said Jim left EFC in good shape, so I asked about his legacy. What was she inheriting?

When Jim started as president of EFC, Carol noted, “there were some issues with some of the councils in EFC’s hub-and-spoke model. In particular, a few councils were facing “competitive pressures” from other organizations, as well as some sustainability issues.

Jim was able to “wind them down very elegantly,” said Carol. He worked through the restructuring of the NAC (National Advisory Council), S&D and EEMAC (Electrical Equipment Manufacturers Association of Canada) and was able to encourage things like expanded Region involvement, improvements in Stats… “just getting on with the business of the day […] I think that’s a huge achievement”.

While chatting with Carol, I pointed out to her that, as president and CEO, she is now wearing all of EFC’s past successes, as well as any failures. I asked her: if she had to pick one EFC success of which she is most proud, what would it be?

After mulling it over a few moments, she replied: “It’s the connection and engagement at the most senior levels of the organizations within our industry, and I’m not sure if that is the same in other industry associations. The fact that we can attract and engage the presidents of all the major corporations, the growing independents, the buying groups that are there, manufacturers of all sizes… the fact that they look to EFC as being kind of the authority of the industry… I think that’s something to be tremendously proud of”.

“When you’re with these people at every EFC event, it’s like family,” Carol said. “I’ve heard others say that, when they’ve been in other organizations, they don’t see or feel that. I think, because of that, it will help us move issues forward… everybody cares.”

Playing the devil’s advocate, I asked Carol whether this “family” could lead others to view the association as just an Old Boys’ Club. She responded without hesitation:

“So picture yourself coming in, new to a situation. If you’re just going to be a wallflower, then, yeah. You’re not opening yourself to get in.”

The biggest equalizer, according to Carol, is getting involved in committees. “When you have to sit beside somebody and work on a common project, that’s when you get to know them from a different perspective. That’s when you earn a different type of respect, so that when you go out to that next meeting, that door is open. You can have a conversation, you’ve broken down that barrier.”

“If I was coming in brand new to this industry, I would go to EFC and say, This is my business, these are my hurdles. What committees do you recommend I get involved with, because I need to break down some barriers. When I call these people, they’re not answering my call. So now you have to sit beside them and work on a problem together… then they will give you a call, because now they know you.”

“When I was with Canlyte, we never dealt with Wesco, but I became great friends with Harald [Henze] because of EFC, because I was on the S&D Council with him, I was on the Executive with him, we worked on projects together. There was a mutual respect. But, had I just depended on a social event, do you think I would have had the courage to walk up to him and say ‘Hi, how do you like me so far?’.”

“So that’s why I say being involved, being engaged… that’s what puts you on the map. [EFC] is not just a social club. If you’re going to walk into an EFC event and just observe and sit in the back of the room, then that’s all you’re going to get.”

Vision moving forward
“It’s always been a mission of EFC to have Region involvement, engaged Region members […] that is something we will always continue because EFC is not just about the head office […] it’s about nurturing thought leadership; involvement geographically, as well as within all levels of the organization; participation in committees that brings out, for example, the marketing people, the HR people, the technical people within our organizations; and, of course, the YPN [Young Professionals Network], making sure we retain the best of the brightest.”

Carol noted the last challenge to which EFC flexed its efforts was figuring out how ensure the existing distribution channel remained the channel of choice (over, say, Amazon, or Home Depot). Its research and initiatives led to distributors developing a better online presence, developing better counters so they would be more appealing, and playing to their strength, which was their relationship with the customer.

The landscape is changing yet again, Carol noted, primarily by technology such as the Internet of Things and integration of previously disparate systems. “Because of that, there is a new crop of customers out there that weren’t there before, so we really have to watch how this evolves.”

EFC members will have questions like: How are our existing contractors going to evolve into this new market? Who are the new players that are coming in? Do we have to acquire other companies? Do we have to gather different forms of expertise? And they will look to EFC for answers.

“The role of EFC of to have our fingers on the pulse of what those changes are; help educate the industry on what’s before us.”

Carol also pointed out the importance of standards and being involved with the bodies who write them. “If our technical resources are not the table, then it’s going to be other people who are making decisions on our behalf, and I don’t think that’s what we want.”

As for EFC’s Regions, “what we want to encourage is growth, flexibility and, at the same time, we want to do it in a responsible way”.

“The one thing I always think about is, What value are we going to bring that group? What are we good at? What are they missing in their life now, and how can we fill that gap?. I do know there are lot of contractor associations out there; this isn’t about duplication, it’s about being complementary to what’s out there.”

“I’m a marketer at heart, and marketing is all about fulfilling customers’ needs. We always have to think about what we are doing for our members, what kind of value we are bringing. Whether you are a manufacturer, a distributor or an industry association, if you’re not fulfilling a need, then you don’t deserve to be around.”

This column originally appeared in the Spring 2017 edition of Distribution & Supply.