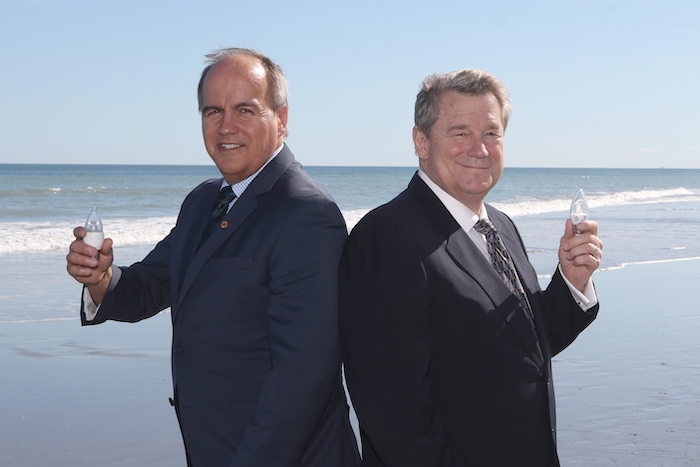 February 26, 2019 – New Brunswick Power (NB Power) and Joi Scientific are working together on what they say will be the world’s first distributed electricity grid to use hydrogen as a baseload, thanks to the province’s readily available coastal seawater.

“We are encouraged with the progress made to date on Hydrogen 2.0 and are looking forward to the next phase,” says Gaëtan Thomas, president and CEO of NB Power (pictured, left). “It has the potential, when mixed with other renewable sources, to deliver zero-carbon loads at lower cost and greater efficiency.”

Indeed, the system is intended to allow hydrogen to be produced locally, on-site and on-demand, when and where it is needed, closer to customers than other forms of power generation. A commercial prototype will be co-developed and tested at Joi’s labs at Kennedy Space Center in Cape Canaveral, Fla.

NB Power signed an initial licence agreement with Joi in 2016, which granted rights to develop, manufacture, use and sell hydrogen and generation systems for small and large utility applications. As such, if the joint commercial development proves successful, NB Power foresees offering its emissions-free grid architecture to other utility operators, across North America and beyond.

“This agreement signals the transition of our technology from the laboratory into full-scale development and commercialization,” says Traver Kennedy, chair and CEO of Joi Scientific (pictured, right). “New Brunswick’s approach for a new zero-carbon distributed grid architecture could provide the blueprint for the way the world generates and consumes electricity going forward.”