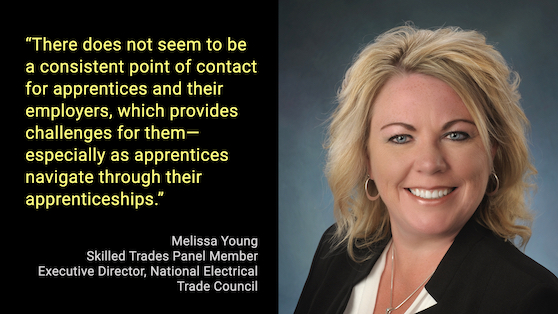 November 6, 2020 – Back in October, the Ontario government appointed a 5-member Skilled Trades Panel to provide advice and recommendations to the Minister of Labour, Training and Skills Development—Monte McNaughton—on developing “a new approach to training and certification”.

Appointed for a 9-month term, the members are:

Due to her direct connection with the electrical industry, Electrical Business reached out to Melissa Young to get more information on the panel, and what she hopes will be the end result.

EBMAG: I’m glad to see the electrical sector has a seat on the panel. What unique insights will you bring to the table?

YOUNG: With almost 30 years working in apprenticeships in numerous capacities, I believe my national scope is probably one of the strongest insights. However, during my time with the Apprenticeship & Occupational Certification Branch at the Province of New Brunswick, I was specifically tasked with working on the modernization of New Brunswick’s apprenticeship system.

Stakeholder engagement was a critical task in achieving consensus and buy-in. In the end, New Brunswick proclaimed a new Act in 2012 that changed the Apprenticeship and Certification Board from an advisory body to an authority body.

Additionally, I spent 30 months as the Atlantic Coordinator for Atlantic Apprenticeship Harmonization. As the first person in this role, I was tasked with establishing consensus among all four Atlantic provinces on very detailed aspects of the apprenticeship system to form a harmonized approach in several key areas, such as compliance and enforcement, classification of the trades, etc., which are some of the same areas that the Skilled Trades Panel is exploring.

From a national perspective, I presently work with all jurisdictions on apprenticeship issues. With education and training being a jurisdictional responsibility, each province or territory has a uniqueness as to how they best serve their stakeholders.

EBMAG: Where do you hope to see the new approach end up with regard to benefits to apprentices and journeypersons, and the public?

YOUNG: I am hopeful that, based on the consultation process, the panel will be able to inform an approach to the skilled trades that will help streamline, simplify, and modernize the apprenticeship and skilled trades system in Ontario.

There does not seem to be a consistent point of contact for apprentices and their employers, which provides challenges for them—especially as apprentices navigate through their apprenticeships.

In addition, the public is generally unaware of the importance of the skilled trades and the impact they have on their safety. Journeypersons really only begin their journey in their trade career upon receiving certification. I believe the Province of Ontario wants to be able to support tradespeople appropriately from the time they begin as apprentices, all the way through to completion as journeypersons and beyond as they progress in their careers.