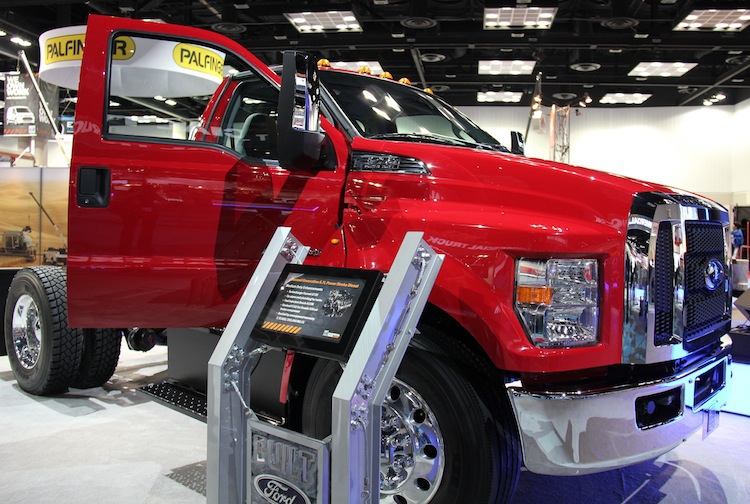 March 17, 2014 – At NTEA’s Work Truck Show 2014, Ford announced it had set a new standard in medium-duty commercial work trucks with the all-new F-650/F-750, which claims to be the toughest, great value and work-ready Ford medium-duty trucks ever. The 2016 model will anchor its commercial truck lineup, which will see a complete refresh of every truck and van over the next 18 months, says the automaker.

Available in three cab styles—Regular Cab, SuperCab and Crew Cab—and three models—straight frame, dock height and a new dedicated tractor model for heavy towing—users can choose between the 6.7-liter Power Stroke V8 diesel with 6-speed TorqShift automatic transmission or a gas-fueled 6.8-liter V10 with a 6-speed automatic. According to Ford, the engine’s compacted graphite iron engine block and so-called reverse-flow layout—which places the exhaust inside the engine’s V-shape while the air intake is positioned on the outside of the V—helps improve turbo responsiveness, isolate the engine’s hottest temperatures, and reduce noise, vibration and harshness.