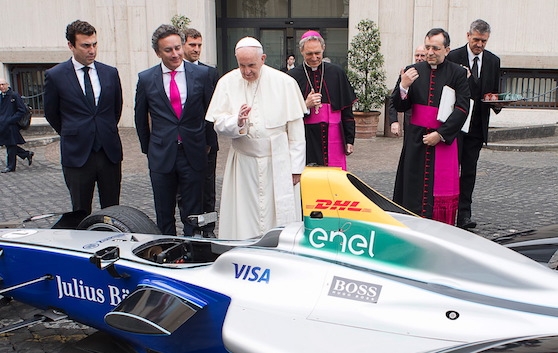 April 11, 2018 – Pope Francis today welcomed a selection of drivers competing in the ABB FIA Formula E Championship to his residence in Santa Marta ahead of the first-ever E-Prix being held on the streets of Rome on April 14.

Alongside Formula E founder & CEO Alejandro Agag, the drivers, team reps and the official championship car were given a private Apostolic Blessing before attending the papal audience.

SEE ALSO Together, we will write the future… one electrifying race at a time (January 2018).

The ABB FIA Formula E Championship electric street racing series is the world’s first fully- electric international single-seater category in motorsport. Formula E is more than just a race to be the best, says its promoters: it’s a competitive platform to test and develop “road-relevant technologies, helping refine the design and functionality of electric vehicle components and speeding-up the transition and uptake of clean transportation on a global scale”.