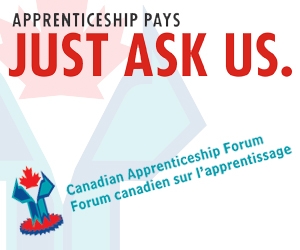 June 4, 2012 – A New Brunswicker has been honoured with a national award for his significant contribution to apprenticeship in the country. William Young received the Darryl Cruickshank Memorial Award today from the Canadian Council of Directors of Apprenticeship. Young is the executive director of the Masonry Industry Association of Atlantic Canada.

“Mr. Young has shown inspirational leadership in the promotion and development of training for aspiring tradespersons here in New Brunswick,” said post-secondary education, training and labour minister Martine Coulombe. “We are pleased his efforts are being recognized by this prestigious award.”

“Mr. Young has been a lifetime advocate for the apprenticeship program,” said Coulombe. “His dedication to working with government and all stakeholders to develop New Brunswick’s certification through the Interprovincial Standards Red Seal Program is one example of how collaboration benefits both workers and employers.”

The Darryl Cruickshank Memorial Award honours contributions made by the late Darryl Cruickshank to the Interprovincial Standards Red Seal Program and recognizes the contribution of industry to the skilled trades. The award was presented at the Canadian Apprenticeship Forum’s 2012 Sixth National Conference, held in Regina, Sask.

The Interprovincial Standards Red Seal Program is a joint initiative of provincial, territorial, and federal governments and is guided by the Canadian Council of Directors of Apprenticeship. The Red Seal is industry’s standard of excellence for the skilled trades.