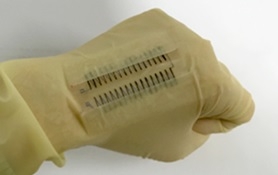 December 17, 2018 – Scientists are getting closer to designing thermoelectric materials that could efficiently harvest heat from the surrounding environment and convert it into electricity to power devices and appliances, according to a review of the latest research in the journal Science and Technology of Advanced Materials (STAM).

These materials could avoid the need to recharge, change and dispose of batteries. By way of example, a flexible thermoelectric device embedded in a glove (pictured) could generate electricity from the wearer’s body heat.

For thermoelectric materials to produce energy efficiently, the research suggests, they need to be able to hold heat and conduct electricity well. Thermoelectric materials that can work near room temperature and are flexible would be especially advantageous, particularly for use in wearable devices. Three types of conducting materials are being investigated for such use: inorganic, organic and hybrid.

Inorganic thermoelectric materials are efficient, but not very flexible, so researchers are working to overcome this hurdle. One device, for example, was fabricated using chromel (90% nickel and 10% chromium) and constantan (55% copper and 45% nickel) layers, covered by a flexible sheet made of polyimide and copper. Micro-thermoelectric generators based on inorganic materials have potential applications in environmental and building monitoring, animal tracking, security and surveillance and medical treatment. In fact, they have already been introduced into commercial devices, such as a body-heat-powered watch manufactured by Seiko.

Most organic thermoelectric devices involve semiconducting polymers, which are more effective, lighter and less expensive than conventional inorganic semiconductors. They are also flexible and mouldable and can be produced in any shape using 3-D printers. They are less efficient, however, at converting heat into electricity. Researchers are now trying to fine-tune the composition, length and arrangement of their molecules, so as to increase the electrical conductivity and crystallinity of the final material.

Further research to combine the advantages of organic and inorganic materials by blending them together is focused on finding optimal compositions and improving the mixing process. Embedding organic molecules into inorganic titanium disulfide crystals, for example, makes them flexible, reduces their thermal conductivity and improves their overall thermoelectric performance.

The research authors conclude thermoelectric devices could replace traditional batteries in many applications, but only after a lot more work in improving their materials.