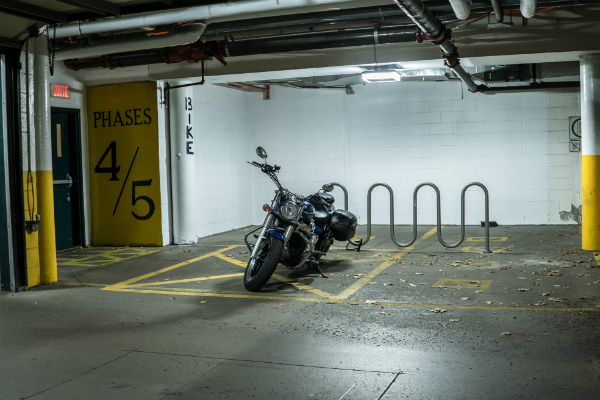 Le Sanctuaire is a large residential condominium development in the heart of Montreal’s Cote-des-Neiges neighbourhood. It surrounds a courtyard with two low-rise commercial buildings. One of these is L’Atrium du Sanctuaire, a 38,000-square-foot structure, operated by FCR Management Services, that is home to medical and professional offices, a Jean Coutu pharmacy and a branch of the Banque Nationale du Canada. The other building contains Midtown Le Sporting Club Sanctuaire. The two share an underground parking garage, also managed by FCR.

Given the mixed use of the buildings, both pedestrian and vehicular traffic volumes are high at all times of day and night. Last year, when FCR sought a new lighting system that would improve visibility and safety for people passing through the garage, while also enhancing esthetics and reducing energy costs, it turned to Concept Illumination for a site evaluation before choosing a specific course of action.

“They are reliable, on budget and on time,“ says Ginette Longpré, senior property manager with FCR, which has worked with Concept Illumination’s team on other commercial lighting retrofits. “There are no surprises!”

Time for an upgrade

Upgrading the lighting was important for multiple reasons.

While the existing fluorescent lights were doing an adequate job of illuminating the garage’s laneways, they did not project sufficient light over the parking spaces for people accessing their vehicles.

Further, the fixtures were deteriorating and maintenance costs were high. As the T12 tubes were an aging technology, replacement parts were expensive and very difficult to find. 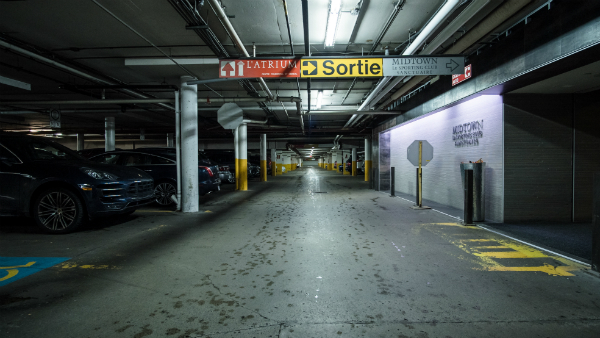 Before the retrofit. Photo: Concept Illumination

The retrofit they decided upon involved the installation of 105 new architectural LED fixtures, selected to reflect the upscale nature of the buildings’ surroundings. Each 70-W luminaire featured a colour temperature of 5,000 K to complement the natural light coming into the garage from various skylights.

For the most part, the fixtures were replaced one-for-one, but several were eliminated altogether, thanks to the superior coverage of the new lights. The retrofit dramatically improved visibility in building entrances from the garage, as well as a service corridor, through the installation of linear LED strips.

The garage’s ceiling posed a design challenge because of its substantial ductwork and piping. Some of the old fixtures were nestled in the midst of these obstructions, so while they were still producing light, it was not distributed to where it should have been. Concept Illumination’s team decided to lower these particular fixtures by approximately two feet, while keeping them within the required height clearance.

“We attached the base of each fixture to the ceiling with a ball joint that had some give, so in the event they are nudged by pedestrians or larger vehicles, they will be protected,” explains Daniel Herz, director of sales for Concept Illumination.

The single biggest challenge while completing the retrofit, however, was managing traffic. The management company’s goal was to keep the garage open during the work, allowing for regular operations and minimizing disruptions to the pedestrians and drivers who access the space. Accordingly, Herz co-ordinated the lighting installation so only one lane would be shut down at a time.

Another planning challenge was the fact the old fixtures were set in concrete. As a result, removal and installation were particularly labour-intensive. 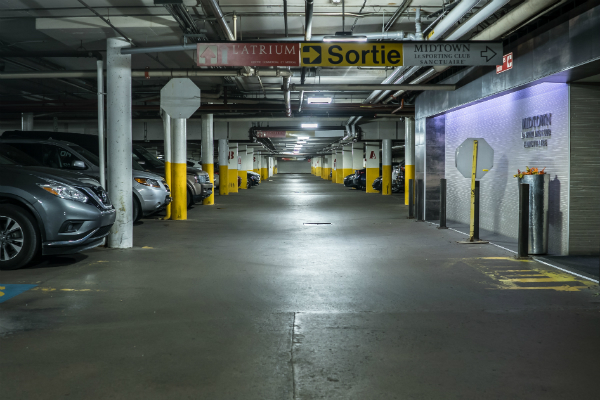 After the retrofit. Photo: Concept Illumination

Despite these challenges, the retrofit was successfully completed within one week, transforming the look of the parking garage.

Most visibly to the tenants, the new architectural fixtures distribute bright and clean lighting uniformly across the garage’s laneways, parking spaces and walkways. There are no apparent ‘hot spots’ under individual lights.

“The garage is so much brighter and the lighting is uniform,” says Longpré. “The tenants’ comments have been positive. They feel much more secure now.”

What the garage’s users cannot see are the significant anticipated energy savings. The 70-W LED fixtures replaced 175-W four-tube T12 fluorescent lights, representing a 60% reduction in energy consumption. As a result, FCR can budget for substantial reductions in its operating costs in the months and years to come.

This article originally appeared in the October 2019 issue of Electrical Business.