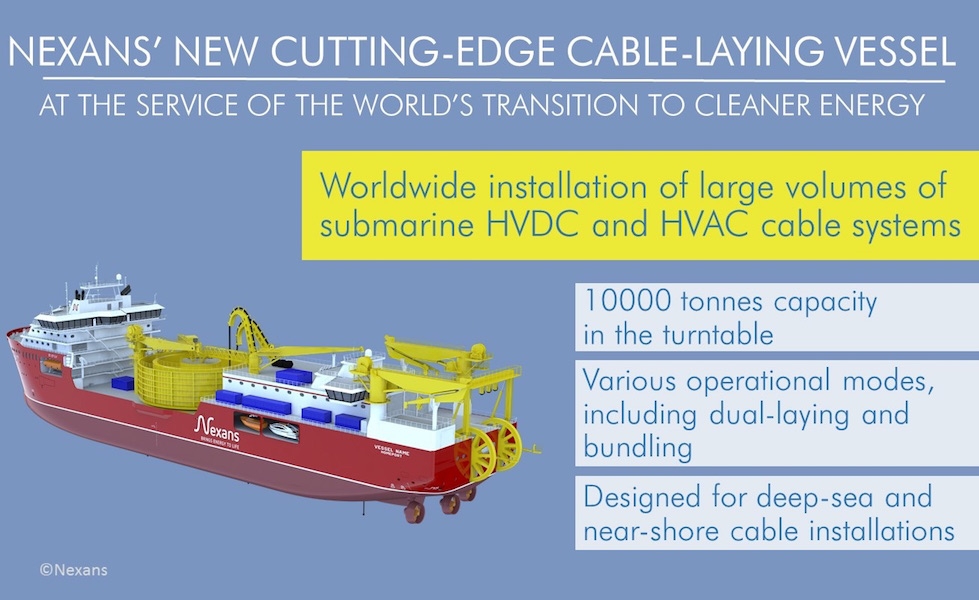 The new cable-laying vessel is expected to be delivered and start operations by Q3 2020.

August 30, 2017 – Global cable-producer Nexans has commenced with the construction of a new cable-laying vessel for submarine high-voltage cable systems installations.

“Together with our legendary vessel CLV Nexans Skagerrak, the new ship will reinforce Nexans’ position as a leading player in the growing submarine HV cabling market,” said Nexans’ Dirk Steinbrink. “With the advanced technology, impressive capacity and the many cable-laying capabilities, this vessel will be one of Nexans’ key strategic assets”.

Designed by Norway’s Skipsteknisk AS, the vessel will be built by Uljanik Group, a Croatia-based shipyard, and is expected to be delivered and start operations by Q3 2020. With a 10,000-ton-capacity turntable, the vessel is designed for worldwide installation of large volumes of high-voltage DC and AC cable systems.

“In this next exciting chapter of our capacity to meet customer expectations, the cutting-edge technology of the new ship will enable Nexans to support countries in their development of the unlimited potential of renewable power generation,” said Arnaud Poupart-Lafarge, Nexans CEO.

Nexans has an industrial presence in 40 countries, says the company, and employs close to 26,000 people.