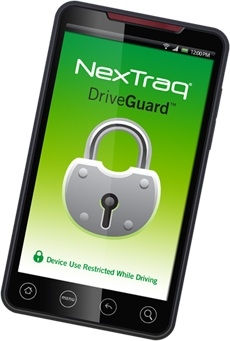 December 31, 2012 – In a concerted effort to discourage distracted driving among electrical service fleets and drivers, NexTraq has released DriveGuard—a solution that blocks or restricts calls, texts, emails, web browsing, and other distractions while driving. NexTraq DriveGuard is powered by Cellcontrol, a distracted driving technology which uses a Bluetooth Trigger Unit coupled with a mobile application on a mobile device to block such mobile functions. Users can also select automated SMS responses to callers noting that the driver is driving and will return calls and messages at a later time. The solution works on phones, smartphones, laptops, handhelds and tablets using, among others, BlackBerry, Android, Windows, Java and iOS systems.