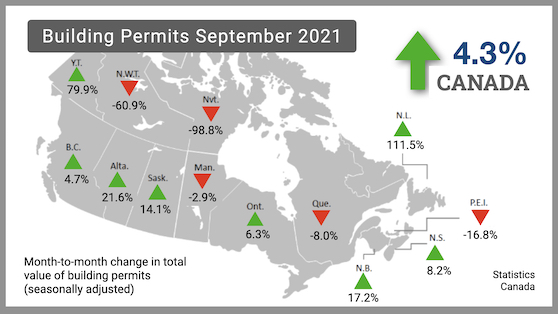 Overall, the residential sector rose 8.2% in September to $6.9 billion.

Construction intentions for the non-residential sector were down 3.2% to $3.3 billion in September, despite climbing 55.0% in Alberta.

The value of institutional building permits dropped 30.6%, mostly due to a 35.3% decline in Quebec. The decrease in that province followed a strong August, when a $116-million permit was issued for a hospital expansion in the City of Verdun.

Commercial building permits fell 12.4% to $1.6 billion in September, mostly due to declines in Ontario.

Industrial building permits jumped 72.1% to $987 million, a record high for the series. Alberta’s growth of 382.9% led the way, reflecting a permit valued at $400 million for the expansion of Calgary International Airport’s Airside Maintenance Centre.

The value of residential building permits fell 5.4% to $20.2 billion in the third quarter of 2021, with declines in both single-family and multi-family dwellings. In contrast, on a year-over-year basis, the residential sector was up 16.5%.

Construction intentions for the non-residential sector edged down 0.2% to $9.6 billion compared with the second quarter. Industrial building permits rose 33.8%, helped by large projects such as the aforementioned YYC Airside Maintenance Centre expansion, and a wind turbine blade manufacturing plant in Quebec.

However, declines in the commercial (-3.2%) and institutional (-14.4%) components pulled the sector down overall for the quarter.