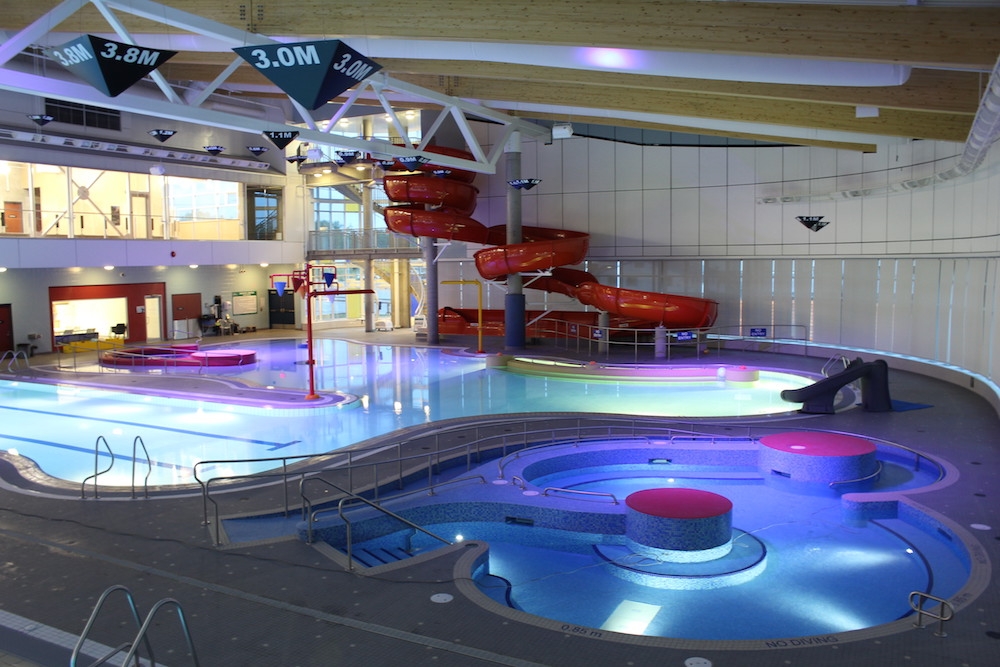 June 28, 2017 – When Houle Electric returned to finish Phase 3 of the Northern Rockies Recreational Centre in Fort Nelson, B.C., they knew the facility was close to the community’s heart.

“It was an iconic project for us,” says Lonnie Trelenberg, Houle’s G.S.C. estimator/project manager for the NRRC project. “There’s so much sentimental value on so many different levels for this project.”

Located on the edge of the northern B.C. wilderness, Fort Nelson is about a 17-hour drive from Vancouver along the Alaska Hwy, and boasts a population of just over 4000.

There are not a whole lot of facilities for the isolated community, Trelenberg explains, which made it all the more devastating when the first recreational centre’s roof collapsed in 2007.

The rebuild occurred over three phases, of which Houle was involved in the first and last. Phase 3 consisted of a 35,000-sf addition to the existing complex in the shape of a new aquatic centre, public viewing area, climbing wall, squash court, Rotary play space, walking track, meeting room, partial basement and 3rd-storey mezzanine for the mechanical and electrical rooms.

“We took on the electrical contract and the controls contract with the mechanical contractor [Chrisman Plumbing & Heating Ltd.] because we have a good relationship with them,” Trelenberg says. “On our low-voltage division, we’d done the rest of the facility, so we had a pretty good idea of what was going on.”

“Basically, anything that had power going through it, we were the ones taking that on.”

It was Trelenberg’s first big project with the company and he says that, while he expected challenges, he didn’t think it would be to the degree they’d experience.

“Just trying to get the manpower to the location was a struggle… never mind the material,” Trelenberg says.

He says only a handful of logistical companies make their way up to the town, as it’s an “extremely dangerous” highway, with long stretches between communities.

“Shipping up there was absolutely excruciating,” he says. “It was a bi-monthly process where there were delayed shipments.”

There was a 40% increase in the project scope with no extended construction period, Houle notes. Add in the frigid temperatures of working in -45°C and trade stacking (the concrete guys were there while Houle was trying to install the electrical, and everything dominoed off of that), and the deadline situation was looking pretty grim.

“We had to break it all down and strategize. We planned two weeks in advance at all times, with who was going to work where and with how much material,” Trelenberg says.

Material delays lead to “people just standing around”. Houle put a stop to that by renting six shipping storage containers about a half-kilometre away.

“This was constantly maintained to make sure we had material there when we needed it, but we had to be careful not to overbuy, either.”

Houle also purchased and outfitted a 50-ft enclosed highway trailer from a local business with heated and insulated office space, and a small material parts warehouse to be kept onsite.

Every worker was then set up with their own workstations and permitted to “fill them up” twice a day. If a worker couldn’t finish their designated job, they had a backup plan or two, Trelenberg says, to keep the project flowing.

He even had one foreman dedicated solely to planning—a saving grace with the 55 revisions made to the contract.

Houle’s prefabrication plant in Vancouver also came in handy, as they tried to have as much built offsite as possible.

“Because of the trade loading, we really pushed prefab on this job,” Trelenberg says. “A lot of our assemblies were already prebuilt, like with our bracketry and our light fixtures. So we’d have a box with a piece of wire, connectors, all ready to go, all wired up. All we had to do was bolt it to the conduit, bolt it to wall, snap it into the light connection and it was done—that saved us a considerable amount of time.”

Disney-esque lights in the north
There’s some Disney-esque magic in the aquatic centre pool, according to Trelenberg, thanks to the Philips Colour Kinetics system: a multi-colour, LED DMX lighting control system.

“Have you even been to Disneyland or Disney World? It’s like the lights there—the Disney Castle at night—done through a digital, programmable lighting system. It’s much more toned down than the Disney version, but every light can produce its own images to form one big image,” Trelenberg says.

Houle helped with the pre-programming so the rec centre can hold lighting shows in the pool and change the lighting colours.

“It’s an extra level of enjoyment,” Trelenberg says. “And staff at the facility believed it could help attract more [people] to programs like water aerobics.”

And it seems to have worked—according to the Northern Rockies Regional Municipality, the new aquatic centre has seen over three times the usage during its first three months after reopening as compared to the same period the year before.

The “concert-level professional lighting system” consists of a 200-head total lighting rail on the north and south sides of the pools, Houle explains, noting the rail system also incorporates an arrangement of low-power consumption emergency lighting for a “sleek look”.

A benefit to the light rail system, according to Trelenberg, is a reduced reflection off the water’s surface, meaning less glare for swimming competitors and spectators.

“You can actually see more clearly into the water, now,” he says.

Another advantage is all the savings when it comes to maintenance, as the pool does not have to be drained and no special equipment is needed (other than a lift) to maintain the lights. Contrary to typical aquatic centres, no fixtures were installed over the pool; they’re all over the decking.

“The light system actually follows the curvature of the building, so I find that extremely cool,” Trelenberg adds.

The pool also has a unique HVAC system, a Reliable Controls product, where air from the pool space is reused to heat the water, according to Nick Hauff, a Houle division manager. “We have to get rid of all the humidity and, instead of wasting that, we put it into reheating.”

The mechanical systems also include using the “low-grade waste heat” from the refrigeration plant—in lieu of natural gas—to heat the aquatic centre building, domestic water and pool water. The added heat recovery system includes heat exchangers, water storage tanks, and circulation and heat pumps. The annual energy cost savings of the added heat recovery system is equivalent to about 3300GJ of natural gas, according to Houle.

No second chance
As the addition was largely made of concrete, precise planning was also required when it came to the conduit.

“All of our conduits came through the concrete slab and then started coming up the walls, and it literally could not be an inch out; if it was, it would not be in the concrete wall that it was supposed to be in,” Trelenberg says.

To help conquer this challenge, they relied on CAD back at the office working in tandem with a remote management tool.

“This meant preplanning in the office and sending it back to the site—making sure the site conditions matched up—because sometimes there’s discrepancy between architectural and electrical. It was all about triple-checking,” he says. “There was no second chance. Once that concrete was poured, it was final.”

In the end, that planning all worked out, he says, and deadlines were met; Houle’s costs were around $2.5 million, while the overall project came in around $34 million, according to the municipality.

Top-notch team
Despite all of the trials and frustrations, Trelenberg says the one thing he is most proud of is the workmanship.

“Our workmanship was so top-notch that every time we had a site visit from an engineer or the electrical authority, they actually made comments on our site review reports.”

The cabling and conduit routing in […] the site in general are works of art. Congratulations to Houle on an excellent job.

Another comment credits the company for being proactive and thinking ahead to avoid future problems, and yet another applauds the pipe layout in the basement.

(Note: Trelenberg and Houle would like to salute Bird Construction, MMM Engineering, Kaisan Architecture, and JM Bean Engineering for their the help and support on the project.)

“We had the chance to influence other trades, because we were so organized—we built our own project schedules and presented those at the trade meetings. We suggested things like, how about the plumbers work over here for that? We didn’t just focus on what we were doing, but also on who was affecting us, because you need that cooperation,” Trelenberg says. “We really grabbed the bull by the horns.”

* This article also appears in the June 2017 edition of Electrical Business Magazine, where there are also MORE PHOTOS. Check out our ARCHIVE page for back issues.