Your daily actions, not company memos, will inform, guide and inspire others—both within your organization and without. 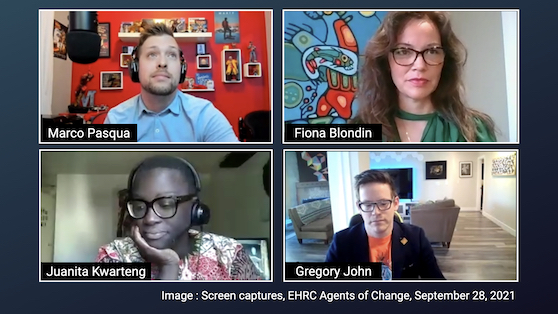 November 22, 2021 – “Forward Together” was the theme of this year’s Agents of Change—a one-day event focused on equipping attendees with the tools they need to address the challenges that under-represented groups face in their workplaces.

Translation? How the heck do we figure out diversity, equity and inclusion?

Conducted by Electricity Human Resources Canada (EHRC), the national event attracted “employees and leaders at all levels” of the electricity sector (and me), giving gave them a forum for sharing stories and swapping DEI strategies.

Besides the moral obligation to ensure everyone feels welcome to participate and contribute fully in your organization, a healthy DEI strategy also helps establish your organization as an employer of choice; meaning, you get first pick from all the talent that’s out there.

We’re more alike than we think

Opening keynote Julia Middleton, author of “Cultural Intelligence”, discussed the importance of developing one’s own cultural intelligence, as this is what allows you to successfully navigate relationships with people “who are not like you”.

I’ve not read her book, but I gathered she not a proponent of avoiding or ignoring the elephant in the room; that is, the person who is different. Instead, engage them in conversation. What makes them tick, what do they value?

“Forget being all polite and pretending we all agree. Let the conflict bring about conversation; don’t sweep it under the rug,” Middleton advised.

Glover has been in the energy industry for some 25 years and, this year, became president of the Alliance to Save Energy.

She told the story of how, years ago at another workplace, she was having lunch with several other black employees, and a boss came along to say her group was “making other employees uncomfortable” but, quite simply, they enjoyed each other’s company.

“Sometimes we have to get over ourselves, and just deal with something that makes us uncomfortable,” Glover said.

To my mind, perhaps the most important DEI advice came from Juanita Kwarteng, diversity & inclusion program manager at Publicis Groupe Canada, who said:

“Fear of mistakes keeps us from doing anything. Don’t let that paralyze you.”

I think it is important for everyone to read this, because it answers the question “I want to do something, but what if I screw up?”.

According to Kwarteng, you should “expect to make mistakes”. That’s how we move forward, and bona fide attempts at DEI—even if they miss the mark—should be respected.

That said, don’t charge forward like a bull in a china shop. Have conversations with the people who will be directly impacted by your efforts. Case in point:

Gregory John is a gay Indigenous man. At one workplace, John told us, his employer invited to “come out” in front of his co-workers so that everyone could talk about him, and he could feel “safe”.

As you can imagine, being put on display like that achieved the exact opposite effect.

One of the speakers I was pleased to hear from is Marco Pasqua, who works with businesses and individuals as an Accessibility & Inclusion Consultant. He has cerebral palsy and has used a wheelchair primarily to get around since birth.

When we think about DEI, our minds often turn to different skin colours, beliefs, gender identities, etc., but Pasqua serves as a great reminder for us to continue to think about how to design spaces universally, and ways to create meaningful access to all individuals, regardless of their abilities.

“With me, you can see I have a disability,” Pasqua said, reminding us that “there are also invisible disabilities” like mental health issues, and people may not come forward because of the stigma.

DEI starts at the top

Organizationally, if any DEI initiative is to have any hope of success, it must have support from management.

In fact, Fiona Blondin, an Indigenous Canadian, said she joined her current employer precisely because she saw diversity, and could see it was being championed by management.

If you’re the head of your organization, Ontario Power Generation’s Ken Hartwick insisted it is important to establish a path of action for your teams, and to give them deadlines.

And by all means, “Don’t set targets past your retirement date,” he added.

On the subject of employee promotions, Hartwick added it is vital you explain why someone got promoted. Otherwise, other employees may automatically assume, for example, “Oh, it’s because she’s a woman”.

Ultimately, having a robust diversity, equity & inclusion approach is not something that is simply relegated to HR.

While human resources absolutely plays a key role, a healthy DEI strategy is something you live. Your daily actions, not company memos, will inform, guide and inspire others—both within your organization and without.

A final word of advice from Kwarteng:

“Not all actions have to be big actions. Small things add up.”