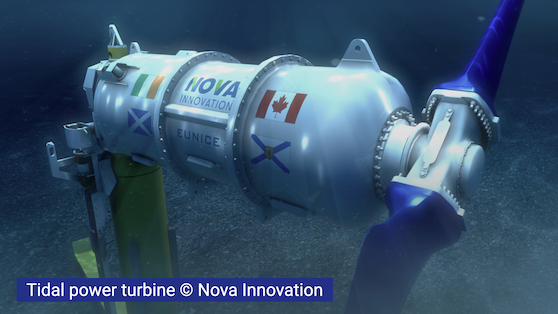 September 11, 2020 – The Government of Canada has unveiled a $9.4-million investment in four tidal energy projects in the Atlantic region, with the lion’s share ($4 million) earmarked for Nova Innovation to build a tidal turbine array using subsea tidal technology in Petit Passage in the Bay of Fundy.

“Canada’s investment reflects the growing confidence worldwide in our technology and our ability to operate it in extremely challenging environments,” said Nova Innovation’s Kim MacNeil. “It will be a huge step forward for tidal energy in Nova Scotia and Canada.”

Located in the Petit Passage at the gateway of the Bay of Fundy, the project will employ up to 15 turbines on the seabed, harnessing “one of the planet’s most powerful tides”.

Nova believes the smaller profile of its M100 D turbines (100 kW) will enable them to withstand the Fundy tide and operate without endangering marine life. The company says it has successfully operated three of the turbines in the Shetland Islands without incident since 2016.

In December 2019, Nova was awarded a provincial permit to install the 15 turbines, together with a commitment from Nova Scotia Power to purchase the electricity throughout the life of the project.

Nova Innovation secured the funding from Natural Resources Canada’s (NRCan) Energy Innovation Program, which provides support to projects reducing emissions through the R&D of clean energy technologies, with the aim of meeting 2050 clean growth targets. Phase 1 of the project will validate the deployment, commissioning, and operation of the first five turbines.

The array will be deployed in phases, with the first turbine scheduled to go live in 2021 after receiving its permit from the Department of Fisheries, Oceans and the Canadian Coast Guard.