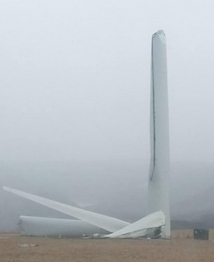 January 5, 2017 – Nova Scotia Power is investigating the collapse of a wind turbine it owns and operates in Grand Etang, Inverness County, on Cape Breton Island.

No one was on site at the time of the collapse on January 4, 2017, and no one was injured, the utility notes.

Constructed in 2002, Grand Etang was one of the first wind installations in Nova Scotia, with a 660kW Vestas turbine. Nova Scotia Power says it is the only turbine of its kind in the province.