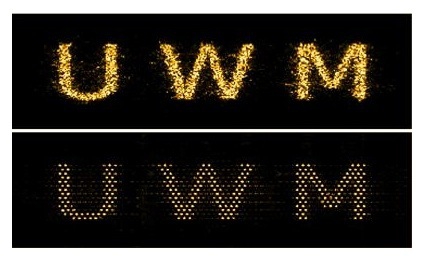 February 25, 2014 – After having recently discovered a new way to propagate multiple beams of light through a single strand of optical fiber, engineers at the University of Wisconsin-Milwaukee (UWM) now have found their fiber architecture can transmit images with a quality that is comparable to—or better than—current commercial endoscopy imaging fibers.

Because of this, they feel the work has potential not only in next-generation high-speed communication, but also biomedical imaging.

The fiber consists of two randomly distributed polymers, which scatter the light. The fiber’s disordered interior causes a beam of light passing through it to freeze laterally, accommodating multiple beams.

“I knew it would transport images,” said Mafi. “What I didn’t expect was that the resolution and contrast would be so good.”

The team loads an image 30-microns wide (about one-third the width of a human hair) into the fiber. At the other end, a lens projects an enlarged image onto a screen. The optical fiber provides a direct one-to-one image transfer, Mafi says, with less pixelation and higher contrast.

The next step is to improve the building process in order to lower the loss of information, say the researchers. They theorize that one way to improve the quality of transported images is to use glass with randomly distributed air holes in the fiber architecture, rather than using polymers.