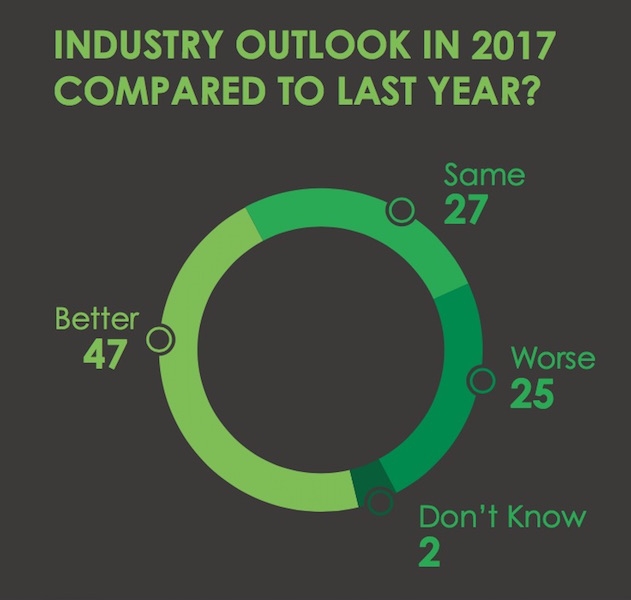 March 14, 2017 – With a score of 60 out of 100, findings from the 2017 “Construction Confidence Indicator” reveal a majority of Ontario’s construction firms expect to conduct more business this year than last.

The Indicator is an annual survey of construction contractors conducted by the Ontario Construction Secretariat (OCS); the 2017 edition was recently released as part of OCS’s 17th annual State of The Industry & Outlook Conference at the Metro Toronto Convention Centre.

“Increased construction activity is always a good sign for the overall economy, and things are decidedly looking better for Ontario in 2017,” said Sean Strickland, OCS CEO. “We’re seeing a couple of possible explanations for the boost in optimism, like investments in major infrastructure projects across the province and an improved economy south of the border.”

VIDEO ABOVE: Footage from the 16th Annual OCS State of the Industry & Outlook Conference 2016, held March 2016.

According to regional data, Central Ontario is the most confident (Confidence score of 62) followed closely by the Greater Toronto Area (61). Northern Ontario reports the lowest confidence (57), but OCS says optimism has, nevertheless, improved since 2016, pointing out significant investment is being made in post-secondary education facilities in Northern Ontario, including major projects at Laurentian University, Canadore and Confederation College.

“Ontario’s economy beat the national average increase in real GDP growth in both 2015 and 2016, and we expect 2017 will mark the year Ontario was the fastest-growing province,” said Dawn Desjardins, deputy chief economist of RBC. “Fiscal stimulus and consumer spending will be key supports in 2017, and will likely lead businesses to pick up the pace of investment activity as the year progresses.”

The Indicator analyzes expectations of growth across five construction sectors: industrial, commercial, engineering/civil, institutional and high-rise residential. In the non-residential sector, the results show contractors expect to see the most growth in the engineering/civil category, with 43% of respondents anticipating “significant growth” in 2017. Expectations for “significant growth” in this sector are highest in Eastern Ontario, at 57%.

Despite the boost in overall confidence, nearly half of the 500 contractors surveyed report they expect the Trump Presidency to have a negative or harmful effect on Ontario’s economy and construction industry. This sentiment is most acute in Windsor-Sarnia, where 59% of respondents believe Trump’s government will harm Ontario’s economy.

Alternatively, opinion in Hamilton-Niagara appears polarized, with 40% of firms forecasting the Trump Presidency will have a positive impact on Ontario’s economy, and 44% predicting a negative effect. Three common sources of concern include increased construction material costs, negative impact on the manufacturing industry and decreasing investment in projects due to economic uncertainty.

The Construction Confidence Indicator also looks at employment trends, notes OCS. This year’s survey shows an 11% increase in apprenticeship employment in the unionized construction sector over the past two years, while the non-unionized sector has only seen a 3% increase. 83% of unionized firms employ apprentices compared to 49% of non-union firms.

CLICK HERE for more information about the conference and the “Construction Confidence Indicator”.