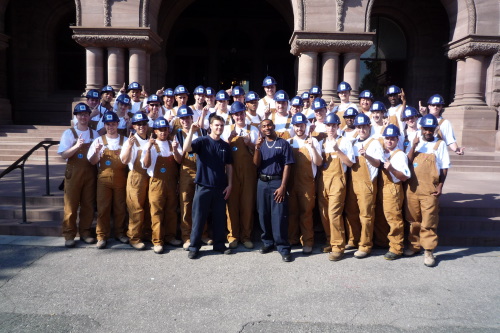 According
to the groups, contractors must have three certified electricians for
every apprentice. By comparison, almost every other province and
territory requires one certified journey person per apprentice. Other
skilled construction trades face similar challenges. They say this
requirement is almost unique to Ontario.

As a
result, claim OEL and CFIB, thousands of young Ontarians are turned
away from apprenticeship jobs, even though “contractors have numerous
unfilled vacancies” amid a growing shortage of skilled construction
tradespersons.

The
groups propose the following remedy: reduce the ratio of certified
electrical tradespersons required for each apprentice from 3:1 to 1:1,
which they say is in line with ratios in other provinces.

“The
Ontario government actively encourages young people to enter skilled
trades and has significantly increased funding for training programs,
even as it obstructs employment opportunities through unfair
apprenticeship ratios,” reads the release. “The same policy also harms
thousands of small businesses that provide contracting services because
they are barred from hiring the skilled employees they need to replace
retiring workers or meet growing workloads.”

“Electrical
contractors alone could hire hundreds, if not thousands, of apprentices
right now if given the chance,” said Mary Ingram-Haigh, OEL president.
“Instead of pink slips, Premier McGuinty should offer apprenticeship
candidates new rules that will let them work.”

The OEL encourages you to CLICK HERE to learn more about the issue.