“People thought of folks in construction as being laggards, but they certainly weren’t.” 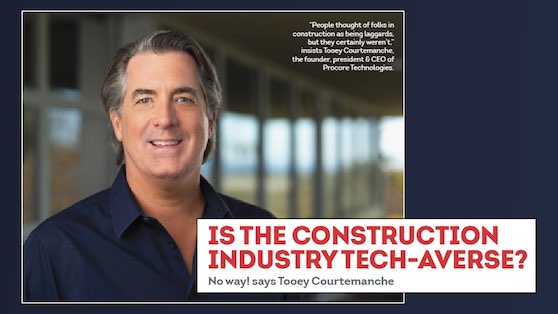 How did Tooey go from corporate HR applications to the world of construction… to founding a company whose mission is to “connect everyone who touches construction […] to manage data and drive better business outcomes”?

It wasn’t that much of a stretch, actually, because a love for construction has been running through Tooey’s veins since at least Grade 8, when he started earning a paycheque by sweeping up a cabinet shop “and hanging out with people I just loved—construction industry folks”.

Electrical Business Magazine recently had the opportunity to connect with Tooey and, although we do chat about the founding of Procore, our conversation mostly revolves around Tooey’s personal and professional mission to help “modernize an industry that has been unfairly labelled as tech-averse”.

“I kind of feel like I’m one of the evangelists for the industry,” Tooey says proudly.

When you dive deeper, you realize that construction industry players are not tech-averse; instead, they’ve been underserved by technology providers. “People thought of folks in construction as being laggards, but they certainly weren’t,” Tooey insists.

Two decades ago, as Tooey visited jobsites, “What I saw was just a whole bunch of highly capable… just the smartest people in the world, who were able to manage this complexity. But they didn’t have any technology to help them, right? So they were using pen and paper, and they could do things with Excel that bankers I work with every day can’t do!”.

Our conversation moved to skilled labour shortages because, as Tooey says, “There hasn’t been a year where the number one issue our customers face is finding qualified, skilled labour to do the jobs. Working construction is highly complicated, and it’s actually getting more complicated over time”.

He quickly identifies stigma as being one of the main challenges; you don’t brag to your parents about becoming a superintendent or a project manager the way you would if you became a doctor, “although I really think we should”.

But aside from the stigma, there is also the fact that construction has gotten more complicated—from the perspective of a skilled trade, at least.

“You can’t just apply for a job and start doing construction. There’s training that needs to go into it.”

Which begs the question: What is Tooey/Procore doing to help address the problem?

“We’re doing a lot, and it’s things that I’m really proud of,” Tooey says, beaming. “We have a giving arm called procore.org, and it’s an opportunity for us to step aside from the commercial aspect of our relationship with the industry and give back.” Part of that includes providing free software to schools, and encouraging women to join the industry.

“You cannot get full employment in construction unless you attract both male and female participants to the industry,” Tooey insists.

“There’s just a lot that we continue to do to try to make construction a career that is something to be proud of, as well as to help give people the skills they need to be successful in the industry. It’s an area of focus that we really, really believe in.”

“Almost more important is educating the parents of kids in K-12,” Tooey says. And part of that education includes discussing the complexity of construction, which Tooey cannot stress enough. “It requires a tremendous amount of education and skills to succeed in the industry.”

“You know, it’s a complicated industry that we serve,” Tooey notes. “Ultimately, everyone’s trying to get jobs done on time, on budget—safely. And when we’re successful, they do.