Articles Features Articles Energy & Power Generation
Ontario needs to use more electricity to make it cheaper for everyone, says OEA 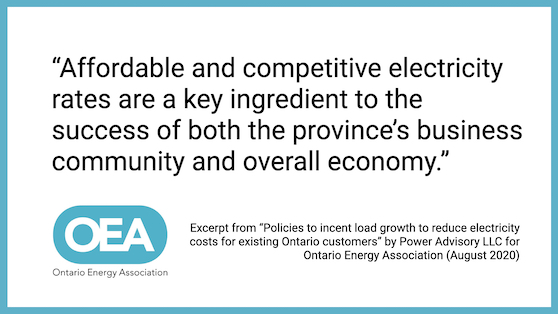 With greater demand, the per-unit cost of electricity for all customers can be reduced, and the need for taxpayer-backed subsidies can be lessened.

That’s the finding of a new report, “Policies to incent load growth to reduce electricity costs for existing Ontario customers”, which was produced by Power Advisory LLC and released by the Ontario Energy Association (OEA).

The report goes on to show how a 5-TWh increase in overall demand could have reduced the per unit cost for all customers by 3% in 2019.

The study also shows how, between 2005 and 2009, Ontario saw a significant reduction in load as a result of a decline in its manufacturing base. This decrease in demand resulted in rate increases for remaining ratepayers.

The province is once again facing a situation where load has declined significantly, notes OEA; this will result in electricity rates increasing, and added costs for taxpayers.

“The recommendations in the report would make our province more attractive in the locational decision-making process for prospective businesses, while at the same time reducing rate pressure for existing residents and businesses,” said Vince Brescia, OEA’s CEO.

According to the report:

Business leaders in Ontario have repeatedly highlighted the impact that faster-than-inflation rate increases are having on operations and investment. Ontario’s Chamber of Commerce, for example, reported that more than 60% of its members cited electricity costs as critical to their competitiveness. This industry group previously estimated that one in 20 businesses and industries in the province are expecting to shut down or reduce operations due to electricity prices. Other energy-intensive businesses have either expanded operations elsewhere or reconsidered investments in Ontario due to electricity prices.

According to OEA, the Ontario government spends roughly $6 billion annually subsidizing electricity rates for households, the majority of which do not need the subsidy (“Help those who need help” April 2020).

Should the government remain on the same trajectory, it will spend at least $228 billion over the next 25 years subsidizing electricity rates.

“Covid-19 presents a good opportunity for Ontario to examine its current electricity policies related to load growth,” added Brescia. “During this time, our province has a chance to reflect on whether it has the tools it needs to optimize load growth for the benefit of existing ratepayers.”

The OEA report can be found by CLICKING HERE (PDF download).