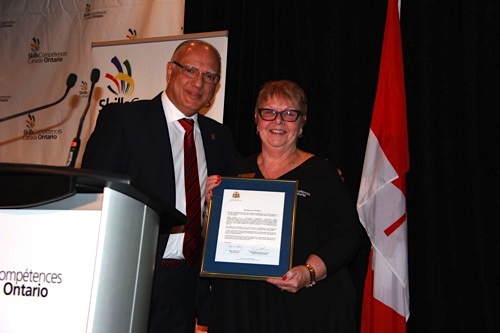 Gail Smyth of Skills Ontario accepts a message of best wishes from the City of Toronto via the west deputy mayor, Vincent Crisanti. Photos R. Francoeur

April 7, 2016 – Skills Ontario says the Ontario Technological Skills Competition (OTSC) is the largest skilled trades and technology competition in Canada, adding it is “thrilled to announce that the event will be moving to the Toronto Congress Centre in 2017”.

“We can take this event to the next level in Toronto,” said Chris Whitaker, a Skills Ontario board member and Humber College president, during the announcement yesterday at the Toronto Congress Centre. “I think this will attract more media attention, sponsors and partners.”

Currently hosted at RIM Park in Waterloo, the competition features 67 contest sites, 44 elementary challenges and workshops, a career exploration showcase, 2200 competitors from across Ontario and over 20,000 spectators.

“The current space is so limited that a waitlist for space started in January,” said Gail Smyth, executive director of Skills Ontario, adding the parking lot is full of tents for events. “500 disappointed young women are on the waiting list [for the Young Women’s Conference] because of space limitations. We’re also experiencing waitlists for the elementary challenges for students in grades 4 and 8 and 780 students in Grade 7 and 8 are on the waiting list for participating in hands on workshops.”

The Toronto Congress Centre will provide an upgraded space that will allow every contest to be hosted under one roof, she continued, making the contests less weather-dependant. The facility can host 300 more competitors with added parking and public transportation as well as “greater accessibility” to all events. Associated events—such as the OTSC closing ceremony and Young Women’s Conference, which are currently hosted offsite—will now also be hosted at the congress centre.

Smyth also presented Mario Blouin, a robotics and information technology teacher at Ecole secondaire catholique de Hearst, with the inaugural Skills Ontario Leadership Award. Blouin’s students have won several gold medals at national Skills competitions and he noted that about 95% of his students end up choosing trades as career options.

Skills Ontario also announced that Hy-Mark and Magna will be offering apprenticeships and job opportunities to some of the medalists this year.

Mark your calendars now for the 2017 Ontario Technological Skills Competition, being held May 1-3, 2017, at the Toronto Congress Centre.

The not-for-profit Skills Ontario is “dedicated to promoting the skilled trades and technologies as viable first-choice career options for Ontario youth”.

Gail Smyth of Skills Ontario accepts a message of best wishes from the City of Toronto via the west deputy mayor, Vincent Crisanti.

PHOTOS: R. Francoeur. See yourself in this gallery? Want a copy? Email rfrancoeur@annexweb.com.
Print this page