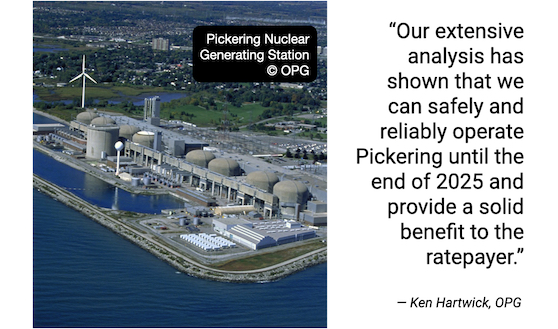 August 17, 2020 – The Ontario government says it is supporting a plan by Ontario Power Generation to extend the life of the Pickering Nuclear Generating Station, thereby allowing 4500 jobs to remain in Durham Region longer.

“I’m pleased that OPG has developed an innovative proposal that will provide Ontarians with emission-free, low-cost energy, and keep highly-skilled Ontarians working in their communities longer,” said Greg Rickford, Minister of Energy, Northern Development and Mines.

“Our extensive analysis has shown that we can safely and reliably operate Pickering until the end of 2025 and provide a solid benefit to the ratepayer,” said Ken Hartwick, OPG president & CEO. “I want to recognize every one of the Pickering staff for their commitment to safety and for their role in improving performance year over year. The station’s performance is better than ever […].”

OPG requires approval from the Canadian Nuclear Safety Commission (CNSC) for its revised schedule. CNSC will make the final decision regarding the safe operating life of the Pickering site. 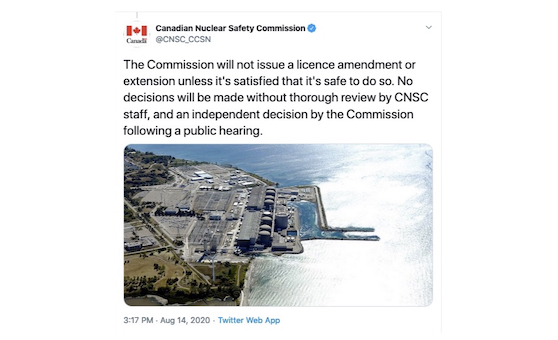 “The Commission will not issue a licence amendment or extension unless it’s satisfied that it’s safe to do so,” CNSC posted to Twitter. “No decisions will be made without thorough review by CNSC staff, and an independent decision by the Commission following a public hearing.”

The first four Pickering nuclear reactors went into service in 1971, says OPG. In 1997, these reactors were placed in voluntary lay-up as part of its predecessor company’s (Ontario Hydro) nuclear improvement program. In September 2003 and November 2005, Units 4 and 1, respectively, were returned to commercial operation, with Units 2 and 3 staying in a safe shutdown state.

Units 5, 6, 7 and 8 continue to operate safely since 1983 when they first entered operation. They have a combined capacity of about 2100 MW.