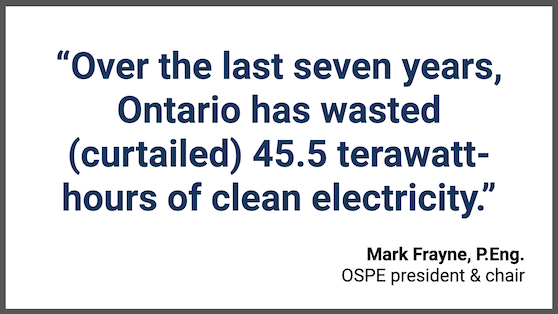 October 25, 2021 – The Ontario Society of Professional Engineers continues to find a consistent upward trend in curtailed clean (i.e. non-emitting) electricity, noting an 8% increase from 2020 and a 94% increase from 2014.

Engineers have been reporting these numbers for seven years, says OSPE, adding that little has been done to mitigate the issue.

“Over the last seven years, Ontario has wasted (curtailed) 45.5 terawatt-hours of clean electricity,” said Mark Frayne, P.Eng., OSPE president & chair. “This system is too expensive and not sustainable. Change is required now.”

Ontario’s electricity pricing system is not structured to account for the low demand it has been experiencing, says OSPE. In addition to the curtailment of clean electricity (non-emitting), the province has continued to export surplus hydroelectric, wind, solar and nuclear electricity to adjoining power grids in neighbouring jurisdictions from 2014 to 2020 at prices much lower than the total cost of production.

This occurs because the province produces more clean electricity than Ontarians currently use and doesn’t have enough storage capacity; hence, it is forced to sell off the surplus at low prices, says OSPE.

Total exports in 2020 were 20.4 TWh compared to 19.8 TWh in 2019. OSPE estimates that over half of those exports were surplus clean electricity—enough to power about 1.4 million homes for one year.

Exported electricity is not wasted, OSPE clarifies. It is used to lower emissions in the U.S. and Quebec, “albeit at Ontario consumers’ expense”.

“Of the 20.4 TWh exported, 10.2 TWh was clean electricity that was sold at very low prices to our neighbours due to low domestic demand. The 7.0 TWh that was curtailed is the discarded (wasted) amount,” explains OSPE.

Ontario’s electricity system is built to support businesses operating between 9 am and 5 pm, with a large percentage of homes left idle for 8 hours, adds OSPE. However, consumption patterns have changed due to the pandemic, with reduced business activity not fully offset by increased home activity. This led to an increase in curtailed electricity in 2020.

“The next few years provide Ontario with an opportunity to reform its retail electricity price plans so domestic consumers can eventually purchase surplus clean electricity at night to charge their electric cars and displace their fossil heating fuel use at the same low price as our export sales,” suggests Paul Acchione, P.Eng., former OSPE president & chair.

“We have time now to sort out a new electricity pricing policy for the future that will achieve the economic and environmental benefits the province and its residents need,” Acchione added.

OSPE wants the province to leverage its excess electricity by modifying Ontario’s energy policies to enable provincial consumers to voluntarily subscribe to modified electricity price plans and create a market to: