August 11, 2020 – The Ontario government has failed to fundamentally solve the province’s electricity problems and continues to shift the burden from consumers to taxpayers by subsidizing hydro rates, according to a new study by the Fraser Institute.

“Successive governments in Ontario have sought to subsidize the costs to produce and consume electricity in Ontario, which have had the effect of masking the true costs, and saddling taxpayers with increased public debt,” said Phillip Cross, senior fellow at the institute and co-author of “Ontario government perpetuates poor electricity policy”. 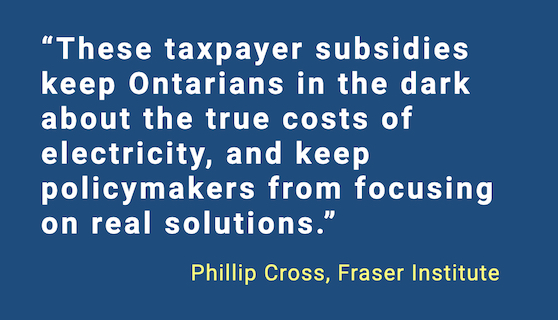 The province’s surcharge on electricity—the Global Adjustment that was introduced in the 2009 Green Energy Act—continues to rise as a result of contracts with (largely) wind and solar energy producers that guarantee a high price, regardless of energy demand.

Instead of lowering hydro prices as promised, the Ford government had to raise them because of the continuing pressure higher costs put on the deficit. In fact, Global Adjustment increased by 13% between June 2018 and 2019, notes the institute.

As a result of soaring hydro prices for residents, the previous and current provincial government introduced taxpayer-financed subsidies for residential ratepayers to lower their electricity costs.

Most importantly, argues the think tank, government subsidies for electricity producers and consumers in Ontario makes it nearly impossible for Ontarians to determine the true costs of electricity since they are incurring costs both in their hydro bills and with their taxes.

“These taxpayer subsidies keep Ontarians in the dark about the true costs of electricity, and keep policymakers from focusing on real solutions,” Cross said.