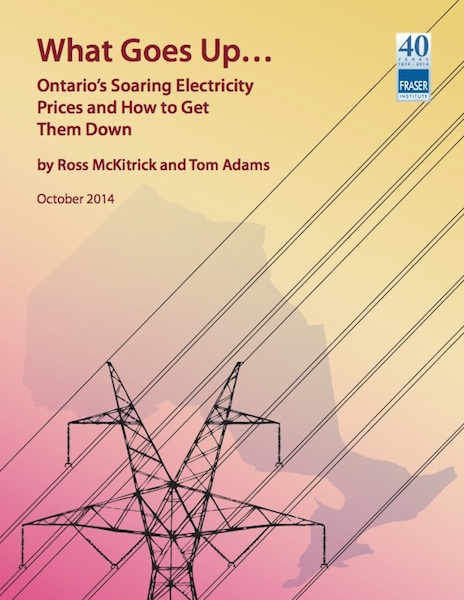 (UPDATED November 5, 2014, with response at bottom) October 30, 2014 – Unless the Ontario government reverses course on its transformation of the province’s electricity system, a new Fraser Institute study concludes power rates will continue to soar.

“Over the past decade, electricity prices in Ontario have skyrocketed, and they’ll continue to rise unless the province starts to put the interests of ordinary Ontarians ahead of industry insiders,” said Ross McKitrick, Fraser Institute senior fellow, economics professor at the University of Guelph, and co-author of the study “What Goes Up… Ontario’s Soaring Electricity Prices and How to Get Them Down”.

In recent years, says the institute, Ontario entered into contracts with renewable energy companies (hydro, wind, solar and biomass) that charge the Ontario Power Authority (OPA) “higher-than-market-value” prices for energy. To make up the difference, “OPA slaps an extra charge—called the Global Adjustment—on the electricity bills of Ontarians”.

“In the U.S., power rates have been falling but Ontarians are paying more than ever because of the Global Adjustment,” said Tom Adams, independent energy analyst and study co-author. According to the institute, Global Adjustment has risen $0.06/kWh since 2007.

To prevent further electricity rate increases, the study suggests the province could halt all new hydroelectric, wind and solar projects; to reduce rates, Ontario could terminate (where possible) existing contracts between OPA and renewable energy companies.

“Wind and solar power systems provide less than 4% of Ontario’s power but account for 20% of the cost paid by Ontarians, yet the government wants to triple the number of wind and solar generators. That’s a good deal for wind and solar producers but a raw deal for consumers,” Adams said.

Moreover, notes the study, Ontario could import electricity from Quebec (particularly while Ontario refurbishes its nuclear power plants) and reopen four of 12 coal-fired power units at Lambton and Nanticoke that had been outfitted with advanced air pollution control equipment prior to their closure, making them as clean to operate as natural gas plants.

“The Ontario government conducted a misleading public relations campaign to demonize coal and scare the public into thinking that the Lambton and Nanticoke plants greatly harm Ontario’s air quality, which is false,” McKitrick said.

To check out the response from the Canadian Wind Energy Association, check out Fraser study “misrepresents” cost of wind energy.