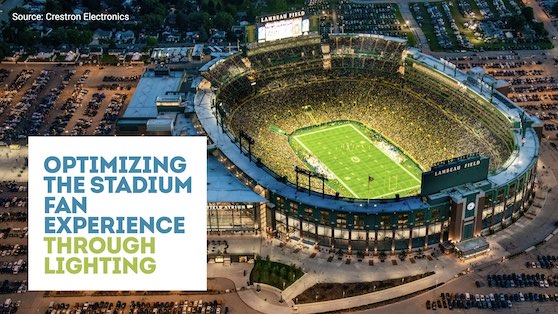 June 24, 2022 – Picture the interior concourse of a professional sports venue in the hours leading up to a game… not the field, where the athletes spend their time, but the surrounding environs where fans are allowed to explore.

These areas include the seating sections, but also the matrix of stairways and walkways traversing the entire facility, the concessions and rest areas interspersed among those corporate boxes, team stores, fan activity zones, and any number of other features.

These areas represent the domain of stadium facilities teams; the hyper-organized legions that do not affect the score of the game but are vitally important to the fan experience.

According to a Deloitte study on stadium experience, fans have four core experiential concerns, only one of which involves gameplay itself. Those concerns are:

• They expect the stadium to be safe, comfortable, and clean.
• They want the view from their seats to match their expectations.
• They desire a high-quality game.
• They expect an exciting atmosphere within the stadium.

While gameplay is the responsibility of the teams themselves, the remaining three concerns are far more dependent on the facilities team. To most effectively deliver fans the exceptional experience they expect, facilities staff should constantly seek out ways to optimize their own workload.

A particularly visible facet of stadium facilities teams’ suite of responsibilities that could use an efficiency enhancement is the commercial lighting.

When people think of stadium lighting, they frequently (and fairly) think of the sports lighting structures that tower over the field of play. When facilities teams think of stadium lighting, however, they consider a far more complex picture. Each of the aforementioned stadium areas are largely unaddressed by the sports lighting but must shine nonetheless, with every lamp representing another line item on the game day docket for maintenance and ops personnel.

Though little of this commercial lighting is physically switched on or off by staff these days, it does not mean this lighting is being controlled efficiently. This is especially true, in fact, for older venues that have undergone multiple concourse renovations.

Stadium renovations are expensive ventures and, as such, are frequently broken up into several phases conducted over many years. During all this construction, personnel changes from phase to phase are not uncommon. This turnover can have a trickle-down effect on the manageability of technology systems for facilities teams decades down the road.

A project manager favouring one lighting control agent or manufacturer could launch a renovation that is completed 15 years later, but by someone else with entirely different preferences, needs, and technologies at hand.

Lambeau Field in Green Bay, Wisc., is a prime example of this situation.

Walk a marathon, or sprint?

In operation since 1957, the Green Bay Packers’ Lambeau Field is one of the most iconic venues in North America. While the game of football being played within the stadium remains pretty much the same as it was in the 1950s, the experience that fans expect has dramatically changed.

To keep up with the times, Lambeau began a series of renovations in 2001 that left its facilities team to contend with over a dozen separate lighting control systems, from different manufacturers, that were not fully integrated. On game days, this meant the facilities teams were responsible for navigating nearly 10 miles of combined steps across over 2 million square feet of stadium space just to turn all the lights on—all of which, of course, needed to be turned off afterward.

When the Lambeau facilities team evaluated this primary system for repair, they discovered the product—which had neared the end of its life cycle—had been sunsetted by its manufacturer… meaning repair components were no longer available, and the team needed a wholesale replacement of the system.

Looking first to the other systems they had onsite for inspiration, the facilities team realized many of those were also failing.

To hear the facilities team tell it, the experience was like a homeowner discovering issues in one part of the house only because they started remodelling elsewhere in the house. And, like any prudent homeowner, the facilities team decided to address the pervasive issue comprehensively then and there, aware that another round of patchworked half-measures would only kick the proverbial can down the road and result in more failures, sunsetting products, and tangled integrations.

The decision to standardize on a single control system flowed logically from there.

In searching for such a system, Lambeau identified a few key priorities centred on futureproofing, security, and scalability. For starters, the system had to be standards-based so that—even should a product sunset, or its manufacturer go under—replacement components would be easy to find and administer.

Another priority was an open protocol Ethernet backbone, which dramatically increases command execution speed and eases future maintenance relative to past systems that relied on proprietary wired connectivity. A third requirement was an adherence to strict IT security standards that included Active Directory Credential Management, which integrates authentication on the control device with the stadium’s enterprise-wide IT infrastructure.

Interoperability across application sites was another priority, as the team wanted a system that could control lighting across concourses, suites, club seats, event spaces, pro shops, theatres—even parking lots. They also wanted something that could integrate into AV control room systems so that, after touchdowns or other significant events, the facilities team could sync lighting scenes in the seating bowl with lighting elsewhere in the stadium.

Flexibility for future growth was a final mandate, as the overhaul of existing lighting control was only Phase 1 of Lambeau’s plan; the team needed lighting control to scale alongside future renovations, too.

After research and consultation, Lambeau’s facilities team was able to satisfy each of their conditions, and the stadium now operates on a single, unified system that has unlocked savings in time, energy consumption, and cost of ownership.

Instead of assigning two unlucky team members the job of traversing the concourse to turn on the stadium’s concourse lighting, facilities managers can simply press a few buttons on a single panel to engage a building-wide, pre-designed lighting scene. Released from their miles-long lighting control traipse, staff can now focus on coordinating other elements of fans’ core four concerns.

A well-lit space always makes spectators feel safer, and good visibility helps sanitation staff to keep things clean. Though commercial lighting won’t have much impact on gameplay or fans’ view from their seats, the process of getting them to their seats is improved through cohesive lighting control.

Stadiums that standardize on a single system also recoup considerable energy consumption costs, as lights are now in use only for the exact amount of time they need to be. Though Lambeau is still gathering a full year’s worth of data to pin down their true savings relative to past years, a comparable stadium—Detroit’s Little Caesars Arena—shaved nearly 20% off their annual energy cost when they switched from a disparate matrix of systems to a single solution. (A switch to efficient LED bulbs accounts for a share of these savings, but that’s just further proof that the more you look at stadium commercial lighting, the more areas you’ll find for improvement.)

The sports analytics movement increasingly drives decision-making both on the field and in the front office, as team leaders recognize that a re-evaluation of performance through an objective and numerical lens could unlock previously dormant value.

Examples of learnings of the sports analytics movement at work include the dramatically increased rate at which basketball teams now shoot three pointers relative to teams of the past, and the diminished proportion of a football team’s salary cap dedicated to the running back position.

This commitment to chasing efficiency and value elsewhere in the organization is yet to truly take hold in stadium facilities’ approach to commercial lighting… but it’s coming.

Bill Schafer is vice-president, Sales-Commercial Lighting, at Crestron Electronics, where he leads sales and product strategy, and is also named on the patent for Crestron’s SpaceBuilder. He and his team continue to innovate the way lighting control systems are designed, installed, and programmed.