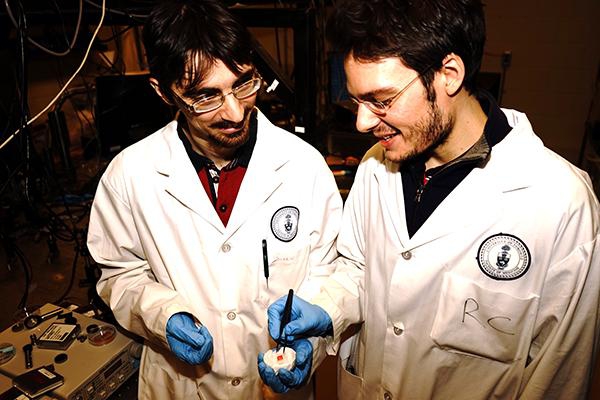 January 31, 2015 – University of Toronto engineers are shining new light on an emerging family of solar-absorbing materials—perovskites—that could clear the way not only for cheaper and more-efficient solar panels, but LEDs, too.

Perovskites are particularly good at absorbing visible light, but had never been studied in their purest form—as perfect single crystals—says U of T. Using a new technique, researchers grew large, pure perovskite crystals and studied how electrons move through the material as light is converted to electricity.

Photo 1: Researchers Valerio Adinolfi (left) and Riccardo Comin examine a perovskite crystal. Perovskites are attracting growing interest in the context of thin-film solar technologies, but had never been studied in their purest form: as perfect single crystals. Photo U of T Engineering.

Perovskite efficiency has climbed to efficiencies of just over 20%, says U of T, beginning to approach the present-day performance of commercial-grade silicon-based solar panels.

While the research has obvious implications for green energy, it may also enable innovations in lighting. Think of a solar panel made of perovskite crystals as a slab of glass: light hits the crystal surface and gets absorbed, exciting electrons in the material. Those electrons travel through the crystal to electrical contacts on its underside, where they are collected in the form of electric current.

Photo 2: A pure perovskite crystal, orange in colour, is mounted on a cryostat. Photo U of T Engineering.

— With files from Marit Mitchell