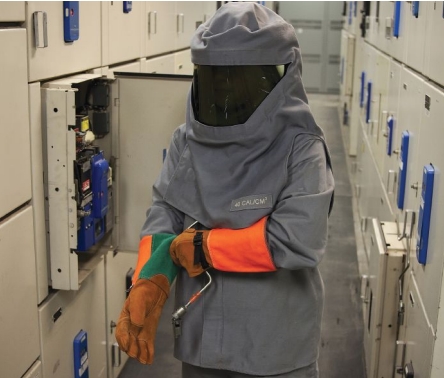 April 12, 2019 – On Nov. 30, 2018, the Institute of Electrical and Electronics Engineers (IEEE) and its standards association (IEEE-SA) published a new technical guide for performing arc-flash hazard calculations to help reduce burn injuries suffered by qualified workers due to equipment failure or less-than-adequate work practices.

IEEE 1584-2018, Guide for Performing Arc-Flash Hazard Calculations, provides mathematical models for engineers to apply in determining (a) the arc-flash hazard incident energy at an assumed working distance and (b) the arc flash boundary distance for electrical equipment. The new standard is based on the collaborative efforts of IEEE and the National Fire Protection Association (NFPA), which formed a research and testing planning committee (RTPC) in 2005 in Baltimore, Md., to investigate arc flash phenomena. Hence, this undertaking became known as the Arc Flash Phenomena Research Project.

“Our work has resulted in a standard that dramatically improves the prediction of hazards associated with arc faults and accompanying arc blasts,” says Konstantinos Karachalios, managing director of IEEE-SA. “Contractors and facility owners will be able to more thoroughly analyze power systems to calculate the incident energy to which their employees could be exposed during operations and maintenance work, allowing them to provide appropriate protection in accordance with the requirements of applicable electrical workplace safety standards.”

Long in the works
Only one Canadian was involved in the RPTC working group in Baltimore: Electrical Business columnist Mike Doherty, president and owner of Blue Arc Electrical Safety Technologies, who is an IEEE senior member. Doherty was the working group’s chair responsible for writing an initial report and estimating the timeline to completion. And as he explains, due to challenges with the requiring funding and getting world-class technical experts to lead the project, the guide’s release was a long time coming in response to industry demand.

“When I was a young electrician, we didn’t wear any arc-rated garments,” he recalls. “I did wear specially supplied coveralls, undergarments and socks when working at the Bruce Nuclear Generating Station in Tiverton, Ont., but those were designed to deal with the radiation hazards. If they had caught on fire from an arc flash, they could have burned into my skin, as they were just a cotton-polyester blend. Ontario Hydro electricians instinctively started to use welders’ flame-resistant garments, as we felt they would be better.”

After a significant safety audit in 1999, a new electrical safety program was developed and rolled out, with management support at the Darlington Nuclear Generating Station in Bowmanville, Ont. The program built on the foundation of the NFPA 70E standard of the day and, most importantly, IEEE Industry Applications Society (IAS) electrical safety workshops, which helped establish Darlington as a leading nuclear power plant for electrical safety knowledge over the next few years.

“A lot changed because we established knowledge and facts,” says Doherty. “We got arc-rated garments into facilities like Darlington, which was a critical improvement of worker safety.”

While Doherty praises the resulting standard update for significantly reducing potential injuries to qualified electrical workers through the proper selection of personal protective equipment (PPE), he cautions against a false sense of safety.

“The numbers based on the latest version of IEEE 1584-18 are harder now, verifiable, repeatable and as good as we can get at this time, adding greater credibility to the standard as the electrical engineering community demands,” he says, “but these values are just one component of the knowledge required to execute a comprehensive job safety plan as per CSA Z462-18, Clause 4.1.6.9.2.”

The fear factor
Another Canadian electrical safety specialist, consultant Terry Becker, also expresses concern with how the guide will be received.

“The new edition of IEEE 1584 will have a significant impact on the completion of new and existing arc flash hazard incident energy analysis studies,” he says. “My concern is with a resulting negative impact for the industry, with engineering consultants misinterpreting the standard and being too conservative with the new requirements when completing their calculations.”

To address his concerns, Becker has prepared a summary of the key changes represented by the new guide and presented it to his clients and other contacts.

“The calculations are for incident energy at an assumed working distance and, separately, for the arc flash boundary distance, e.g. where incident energy is calculated at 1.2 cal/cm2,” he says. “Some of the updated requirements that must be assessed by an electrical engineer with suitable power system study experience and competency are: system operating modes and determining the available bolted fault current and arcing fault current; protection and co-ordination; fault clearing times and the use of the two-second guideline; voltage level considerations for arcing fault sustainability; gaps between conductors; enclosure sizes; and box and electrode configurations.”

“One of the most significant changes, which will need to be assessed appropriately, is to box and electrode configurations for specific electrical equipment relating to specific energized work tasks,” he says. “If conservatively assessed, incident energy values could increase by up to 200%. I am concerned that with some of the issues I have reviewed with arc flash hazard incident energy analysis studies that have already been completed, the 2018 changes will create additional issues.”

With this in mind, Becker suggests engineering associations across Canada should establish a professional practice guide for such studies and issue it to all professional electrical engineers throughout the country.

This article originally appeared in the April 2019 issue of Electrical Business magazine.