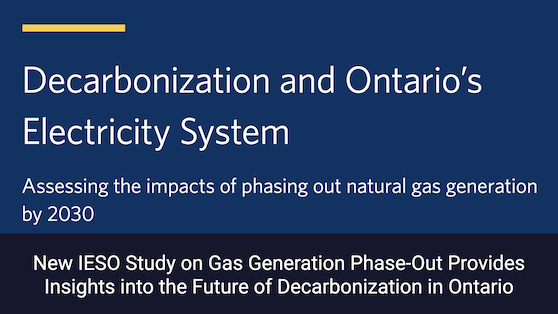 October 7, 2021 – Phasing out gas generation by 2030 in Ontario would result in blackouts and hinder electrification, concludes a study released today by the Independent Electricity System Operator (IESO), “but could be considered given more time and planning”.

“Ontario’s electricity system is 94% emissions-free as a result of the phase-out of coal generation seven years ago,” said Lesley Gallinger, IESO president & CEO. “This gives us a real advantage when it comes to electrification: our system offers an immediate and cost-effective approach to emissions reduction from other sectors in the economy.”

The study “Decarbonization and Ontario’s Electricity System” examined the viability of a complete phase-out of natural gas generation in the province by 2030.

KEY FINDINGS from the study

A complete phase-out of gas generation by 2030 would lead to blackouts, as electricity would not always be available where and when needed. Gas generation offers a set of services that keep the grid reliable and help balance the variability of wind and solar output.

There is no like-for-like replacement supply that can offer similar operating characteristics of gas generation. Because gas is generally always available and can respond quickly, at least 17,000 MW of non-emitting forms of capacity and 1600 MW of energy conservation would be needed to take the place of 11,000 MW of natural gas generation capacity.

IESO’s modelling of how to replace gas by 2030 would require more than $27 billion to install new sources of supply and upgrade transmission infrastructure. This translates into a 60% or $100 increase on the average monthly residential bill.

The model is based on a number of optimistic assumptions, IESO admits. In reality, there are significant practical reasons why it would not be possible to build substantial amounts of new supply and reorient the system to incorporate it by 2030:

– Building and upgrading substantial transmission and generation infrastructure (which includes regulatory and environmental approvals, as well as people, capital, resources) would need to be completed within an 8-year timeframe. Today, the development of a single new transmission project can take at least seven to 10 years under optimal circumstances.

– Year-round electricity supply would need to be available from Quebec, which is unrealistic given that province relies on electricity from Ontario and other jurisdictions during the winter months. Quebec is expected to fall below required levels of reserve capacity by 2030.

– Storage and demand-response would need to supply energy and demand reduction in unprecedented quantities—far beyond what is currently attainable.

• Replacing gas would mean relying on newer forms of supply such as storage, small modular reactors and demand-response, which are not yet proven in Ontario at the scale required. Nor are there sufficient people, capital and equipment to build the necessary replacement infrastructure by 2030.

The study goes on to explain that an increase in electricity sector emissions does not necessarily mean an increase in economy-wide emissions. An electric vehicle charged up in Ontario, for example, produces only 3% of the emissions produced by a similar car that runs on gasoline. Were that EV charged on the hottest summer days when gas is used the most, it would still produce only 40% of the emissions compared to its gas counterpart.

Electrification of other sectors offers a far more cost-effective pathway to decarbonization than removing natural gas from the grid, adds IESO. Phasing out natural gas generation would bring the cost of carbon reduction in the electricity industry to at least $464 a tonne—“a steep price compared to other carbon abatement efforts”.

While the assessment determined that the removal of gas from the grid is not possible by the end of the decade, there are potential paths for achieving this accomplish this over a longer timeframe while ensuring reliability.

“As the organization responsible for reliability of the grid, we are taking steps to ensure that it can support wide-scale electrification,” said Gallinger. “But we can’t do this in isolation. We will be working with the electricity sector—as well as businesses, universities, municipalities and other organizations in the electrification space—to determine how we can best support efforts to meet provincial emissions targets.”

In response the study, Ontario’s Minister of Energy, Todd Smith, has asked IESO to evaluate a moratorium on the procurement of new natural gas generating stations in the province.

Secondly, he asks IESO to develop an “achievable pathway to phase-out natural gas generation and achieve zero emissions in the electricity system”, which should consider:

• The reliability of the electricity system.
• The cost to electricity ratepayers.
• The timeline on which this would be achievable.
• The positive or negative effect this would have on electrification of the broader Ontario economy (e.g. industry, transportation) and reaching the province’s overall climate goals.
• The possibility of maintaining the generating facilities but replacing natural gas with green fuels, such as hydrogen and renewable natural gas, or the development of utility-scale carbon capture and storage.
• The role of technologies like pumped storage, battery storage combined with non-emitting resources, hydro, nuclear, and demand-response to eliminate emissions in the electricity system.

“Thank you again for your study and I look forward to receiving a report back on this additional analysis by November 2022,” writes Smith.

The report and backgrounders are available on IESO’s website.