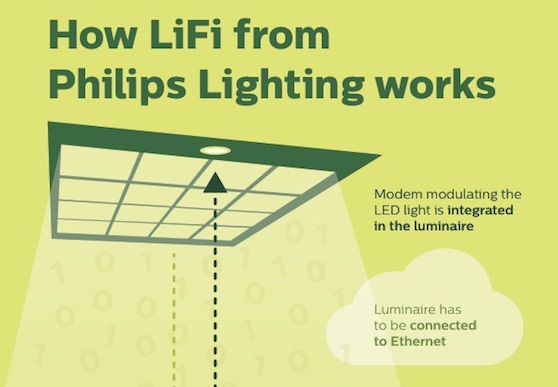 Li-Fi (light fidelity) is the technology by which data is transmitted via light waves instead of radio waves (e.g. Wi-Fi).

“While radio frequencies are becoming congested, the visible light spectrum is an untapped resource with a large bandwidth suitable for the stable simultaneous connection of a vast array of Internet of Things devices,” said Olivia Qiu, chief innovation officer with Philips Lighting.

Philips’ office luminaires enabled with Li-Fi provide a broadband connection with a speed of 30 Mb/s without compromising lighting quality, says the company, adding this is the equivalent of streaming several HD-quality videos while conducting video calls simultaneously.

How does it work?
Each luminaire is equipped with a built-in modem that modulates the light at speeds imperceptible to the human eye. The light is detected by a Li-Fi USB dongle plugged into the socket of a laptop or tablet (in the future, Li-Fi may be built directly into devices). The dongle returns data to the luminaire through an infrared link.