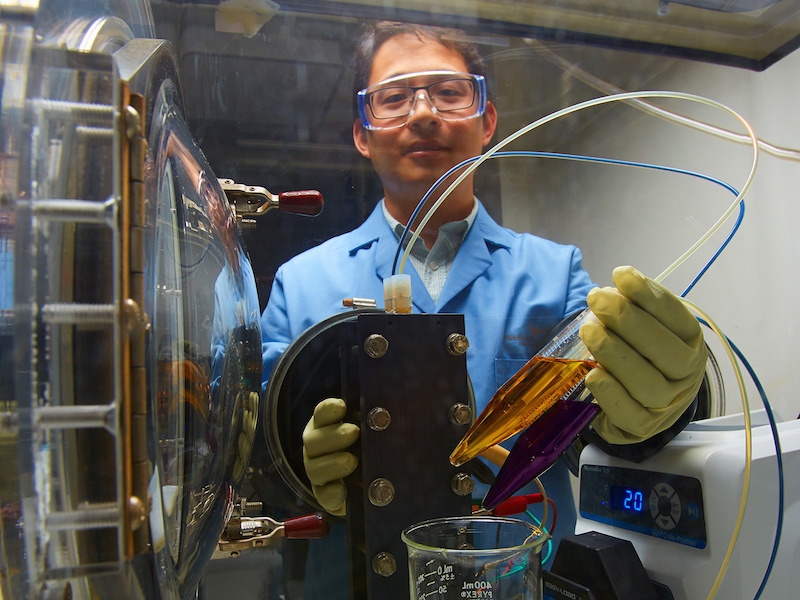 The organic aqueous flow battery (described in a paper published in “Advanced Energy Materials”) is expected to cost $180/kWh “once the technology is fully developed”. The lower cost is due to the battery’s active materials being inexpensive organic molecules compared to the commodity metals used in today’s flow batteries, says PNNL.

“Moving from transition metal elements to synthesized molecules is a significant advancement because it links battery costs to manufacturing rather than commodity metals pricing,” said Imre Gyuk, energy storage program manager for the U.S. Department of Energy’s (DoE’s) Office of Electricity Delivery & Energy Reliability (OE), which funded the research.

Flow batteries generate power by pumping liquids from external tanks into a central stack. The tanks contain liquid electrolytes that store energy. When energy is needed, pumps move the electrolytes from both tanks into the stack where electricity is produced by an electrochemical reaction.

Both flow and solid batteries were invented in the 1970s, explains PNNL. Lithium-ion batteries can carry much more energy in a smaller space, making them ideal for mobile uses. The technology gained market acceptance quickly, for both mobile uses like cell phones and larger, stationary uses, like supporting the power grid.

Li-ion batteries now make up about 70% of the world’s working, grid-connected batteries, according to data from DoE-OE’s Global Energy Storage Database, says PNNL, but “issues with performance, safety and lifespan can limit the technology’s use for stationary energy storage”.

PNNL says flow batteries store their active chemicals separately until power is needed, thereby reducing safety concerns. Nearly 79% of the world’s working flow batteries are vanadium-based, according to data from the Global Energy Storage Database. While these chemistries are expected to be the standard for some time, future flow battery cost reductions will require less expensive alternatives, such as organics.

“Using readily available materials makes our all-organic aqueous flow battery more sustainable and environmentally friendly. As a result, it can also make the renewable energy it stores and the power grid it supports greener,” Wei said.

To test the new battery design, Wang and his colleagues created a small, 600mW battery on a lab countertop. They repeatedly charged then discharged the battery at various electric current densities, ranging from 20mA to 100mA per square centimetre. The test battery’s optimal performance was between 40mA and 50mA per square centimeter, where about 70% of the battery’s original voltage was retained. They also found the battery continued to operate well beyond 100 cycles.

Next, the team plans to make a larger version of their test battery that is able to store up to 5kW of electricity. Other ongoing efforts include improving the battery’s cycling so it can retain more of its storage capacity longer.