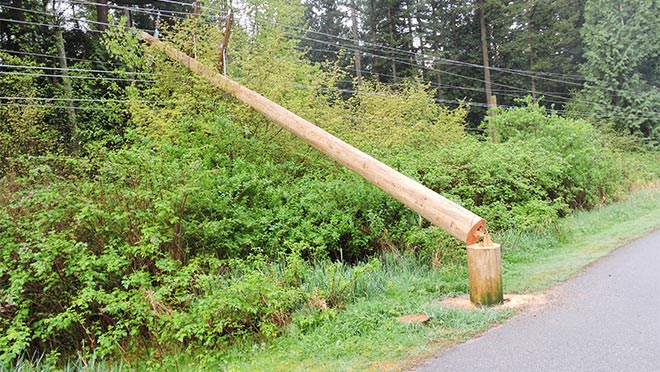 April 19, 2016 – BC Hydro reported four transmission poles carrying a 60kV transmission line running through the Green Timbers area in Surrey were cut down with a chainsaw, resulting in an outage for 6000 customers in Whalley.

EBMag contacted the utility about this incidence, and BC Hydro tells us the vandalism did not appear to be motivated by copper theft.

BC Hydro says, naturally, it is “extremely concerned about this dangerous act of vandalism”. In addition to the transmission line carrying 60,000 volts, these poles carry two sets of high-voltage distribution circuits, each carrying 25,000 volts. “This could have injured or killed a member of the public or our crews as BC Hydro worked to make repairs,” said the utility.

More than a dozen individuals worked on repairs, which involved replacing the damaged poles and transferring the conductors and circuits to new ones.

BC Hydro is working with the RCMP to investigate this incident.