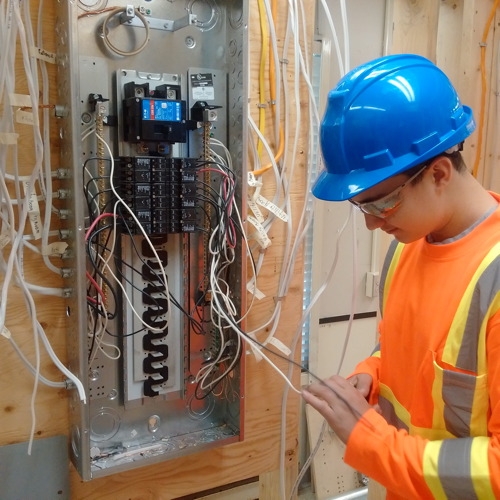 Students were tutored in the installation of a main service panel and how to handle proper feeds back to the panel from various rooms in a house. Photo courtesy Port Perry High School.

November 9, 2016 – Sixteen year-old Charlie Kerry says he always had a little bit of an interest in the electrical field and, now, after a new course offered at his high school this past spring, he’s set his sights more squarely on becoming a powerline tech.

“We went to Hydro One’s training centre and it was really cool and interesting, and seems like a lot of fun,” the Grade 11 student says.

Kerry’s high school in Port Perry, Ont., launched its Electrical Network program in February, where students learn more about residential electrical wiring and associated downstream connected loads, as well as how powerlines work and the maintenance involved. About 17 students signed up and there’s already a waiting list for next year, says Kevin Lanigan, who teaches the course.

“A lot of them have never had this type of exposure before, and I was really surprised at how engaged they were,” Lanigan says. “When you walked in here, all [the students] had hard hats on, all were working, all participating in the entire program.”

School officials say they don’t know of any other high school in the province offering this type of course.

The program gets right down to business

Thanks to Hydro One, the program boasts miniature hydro pole replicas (about 6-ft tall) in the schoolyard and, inside the classroom, the wood construction class set up frames to mimic a house floorplan. Students were responsible for wiring up either the kitchen, living room, etc. Kerry says this was his favourite part.

“The group I was with, we wired up a bathroom with a heated floor, Jacuzzi tub, light fixtures and a couple outlets. It was just cool,” he says.

Once the room was laid out and wired, they had to make sure there were proper feeds back to the panel and tie in, he adds.

Kerry also learned how to calculate voltage, amperage and ohms, and how to wire-up services entrances.

All projects were critiqued according to the CE Code.

“It’s very exciting,” says Jake Smith, a teacher and the tech head at Port Perry High School, explaining the school has put through a lot of commercial and residential electricians, and powerline techs, over the past decade.

“Up until this point, we haven’t done anything really to train them properly—other than [provide] those employability skills. Now we are giving them hands-on, practical skills so, if they do a co-op or post secondary or go to work for Hydro One, they’re not just adequate, but at the top of the class and can mentor other students,” Smith adds.

Not possible without industry support

Earlier this summer, the school gave a tour of its trades programs for the companies who helped get the Electrical Network course on its feet. Representatives from Hydro One, Eaton, Hubbell, Westburne, the Electrical Safety Authority and more attended. Other contributors included IPEX, Thomas & Betts and Circa Hydel.

Ken McCallum with Westburne did most of the coordinating in terms of gathering donated material for the program.

“We will be continuing to support Kevin in this program moving forward,” McCallum says. “We have had discussions about coming into the school to present about careers in the electrical business beyond carrying tools, such as industrial automation and electrical distribution.”

John Wood, a construction area sales manager with Eaton, also toured the school and says Eaton is proud to be a part this hands-on learning.

Port Perry HS—which also boasts a live auto shop, greenhouse and hydroponics lab for the food sciences class to harvest school-grown fish—calls its tech education “gold collar” initiatives because “we all go to work eventually”. It says it believes in celebrating the trades—a Grade 10 “Women in the Trades” course is launching this year—and exposing students to real world challenges and experiential learning.

“What we want to do for teenagers is to let them know this is not only a viable option for them but an incredibly lucrative, well-paid option doing important work,” Smith says of the Electrical Network course. “We try to instil that in them at this point and, if it is an option for them, we support them… We want them to not just go out and be successful, but be incredibly successful after graduating high school.”

Students were tutored in the installation of a main service panel and how to handle proper feeds back to the panel from various rooms in a house.