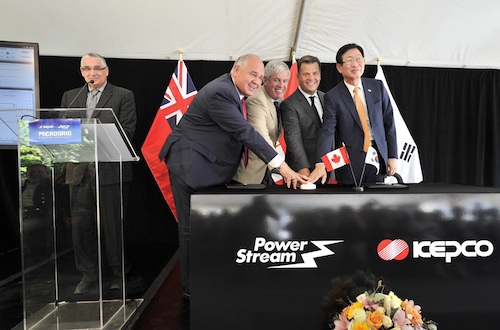 June 30, 2016 – PowerStream, in partnership with the Korea Electric Power Corporation (KEPCO), says it has officially launched a utility-scaled micro grid, which has the capacity to provide several hours of backup power supply for about 400 customers residing or owning a business in Penetanguishene, Ont.

“This is another example of our commitment to find innovative solutions to improve reliability and provide more energy choices for our customers,” said Maurizio Bevilacqua, PowerStream chair. “We look forward to continuing to build upon this technology for energy customers in our service territory and beyond.”

At the heart of the solution is the micro grid Distributed Energy Resource Automation System (MiDAS), a controller “that can operate autonomously and optimize the way in which power is delivered”. It has the flexibility to operate the micro grid either connected to (grid mode) or disconnected from the provincial grid (island mode), PowerStream explains, which enables the utility to provide power to customers even when there is a loss of supply from the Hydro One transmission lines.

MiDAS can also facilitate the use of renewable power sources, PowerStream adds.

Installed adjacent to the Robert Street municipal substation—located east of the town’s Main Street and connected to a distribution powerline—the system consists of a 750kW “power conversion system”, 500kWh of stationary batteries, a number of automatic switches, voltage regulation devices and other grid automation equipment.

The Penetanguishene micro grid is being operated from PowerStream’s system control centre at the company’s head office in Vaughan, Ont. and allows for performance monitoring by KEPCO through remote accessibility.

The launch also featured PowerStream and KEPCO officials signing a Joint Development Agreement, which will serve as a framework for the two energy companies to offer the MiDAS solution to other communities and customers.

See more on the initial Memorandum of Agreement (MOA) the two companies signed last July HERE, and news from when construction began HERE.