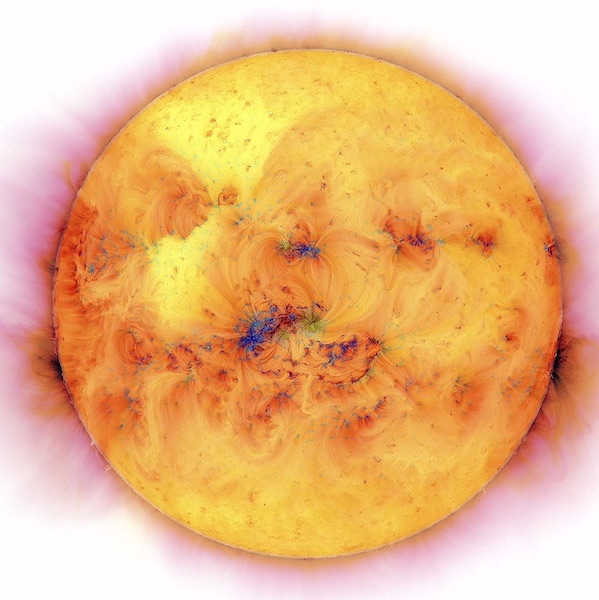 June 12, 2015 – Large magnetic storms from the sun—which can affect technologies such as utility grids and GPS—could soon be predicted more than 24 hours in advance, thanks to a new measurement and modelling tool.

“As we become more entwined with technology, disruption from large space weather events affects our daily lives more and more,” explained Dr. Neel Savani, an alumnus and visiting researcher at Imperial College London, and a space scientist at NASA’s Goddard Space Flight Center. “Breaking through that 24-hour barrier to prediction is crucial for dealing efficiently with any potential problems before they arise.”

VIDEO: On January 7, 2014, the Sun’s surface erupted with an unusually large explosion, called coronal mass ejection (CME), with NOAA releasing a significant false alarm geomagnetic storm at Earth. This initial structure seen as magnetic loops just south of centre on the solar disc reached out above the solar surface.

Coronal mass ejections (CMEs) are eruptions of gas and magnetized material from the sun that have the potential to wreak havoc on satellites and Earth-bound technologies, disrupting radio transmissions and causing transformer blowouts and blackouts.

The orientations of magnetic fields within CMEs depend on two things: their initial form as they are erupted from the sun, and their evolution as they travel toward Earth. Mass ejections originate from two points on the Sun’s surface, forming a croissant-shaped cloud in between that discharges into space.

This cloud is full of twisted magnetic fields that shift as they travel. If one of these magnetic fields meets the Earth’s magnetic field at a certain orientation, the two will connect and open  a door that allows material to enter and cause a geomagnetic storm.

Solar storm predictions had previously relied on measuring the initial CME eruption, but were not efficient at modelling what happened between this and the cloud’s arrival at Earth. The new technique—developed by a team led by Savani—takes a closer look at where mass ejections originate from on the sun and makes use of a range of observatories to track and model the evolution of the cloud.

Savani and colleagues have tested the model on eight previous mass ejections, with the results showing great promise, they say, at improving the current forecasting system for large Earth-directed solar storms. If further testing at NASA supports these initial results, the system could soon be used by NOAA in the States and the Met Office in the United Kingdom for geomagnetic storm predictions.

Related
What do a heliophysicist and our power grid have in common?
Canadians make the case for solar power… from space!
Alberta issues large-scale solar power RFP
GE and First Solar to advance thin-film solar cells and modules
Tags