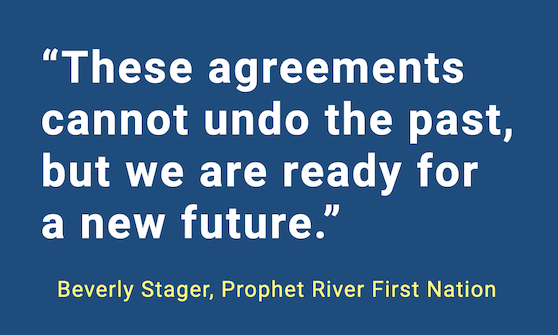 August 6, 2020 – The Province of British Columbia, BC Hydro and Prophet River First Nation have concluded two agreements, resulting in the discontinuation of the First Nation’s civil claim against BC Hydro and the province on alleged infringement of Treaty 8 rights related to the Site C project.

“These agreements cannot undo the past, but we are ready for a new future,” said Councillor Beverly Stager, Prophet River First Nation.

The province will work with Prophet River to improve land management and restore traditional place names in certain areas of cultural significance. Prophet River will also receive ongoing payments during the operation of the Site C project and the transfer of provincial Crown lands, as well as a woodland licence for community forest management.

(The province and Prophet River will engage with local governments, stakeholders and neighbouring First Nations during land management discussions, and prior to any Crown lands being transferred. The next steps will include identifying specific parcels of Crown land to propose for potential transfer.)

Components of the agreements between the groups include:

• An impact benefits agreement between BC Hydro and Prophet River First Nation.

• A tripartite land agreement between BC Hydro, the provincial government and Prophet River First Nation.

• A letter of commitment signed by the Province.

“These agreements will not prevent Site C from flooding the Peace River or address impacts of the previous dams. But they are a new start with B.C. and BC Hydro, a chance to move forward with mutual respect, and common purpose using Treaty 8 as our guide,” said Councillor Jacqueline Reno, Prophet River First Nation.