Features Blog
Proud of your projects? Tell us! • From the Editor 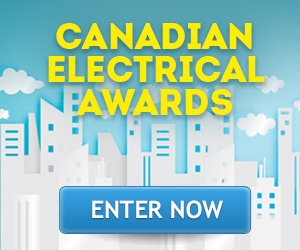 August 18, 2017 – You’ve seen the full-page ads in Electrical Business Magazine and the wallpapers here at EBMag.com. You’ve had most of the spring, and all of summer, but now is the time to hunker down and take 10 to 15 minutes to fill in your nomination for the 2017 Canadian Electrical Awards, which recognize noteworthy Canadian electrical installations and electrical safety champions.

The beauty of the Canadian Electrical Awards program—which still includes the special category of Electrical Safety Champion—is its inclusivity. We accept Nominations from electrical contractors, of course, but also anyone involved in the electrical scope of the project, including:

That’s right: if you’re reading this book, then either you belong in the Canadian Electrical Awards program, or you know someone who does. Nominate!

Everyone is busy, I get it… because of that, we’ve made the nomination process as simple as possible. Seriously, go now and check out:

and you’ll see the Nomination form is amazingly short and sweet. And unlike other awards programs, there is no cost to enter… just 10-15 minutes of your time.

That’s thanks in large part to our program sponsor I-Gard, who is helping us deliver this much-needed national recognition program for electrical professionals.

As a reminder, the award categories are:

The Electrical Safety Champion remains a special category within the overall awards program. Rather than individual categories for Contractor, Maintenance Team, Utility and Individual, all submissions from any of these groups will be judged together to produce 2017’s champion.

Finally, if you submitted a nomination in the past but did not walk away with an award, please re-submit. We received some excellent nominations in the past, and would love to judge those same nominations again. This could be your year!

* This column also appears in the upcoming September 2017 edition of Electrical Business Magazine.